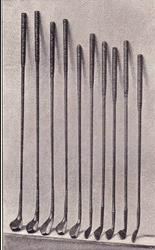 GOLF EQUIPMENT has changed dramatically over the years. Essentially, the ball is the same shape and size, but the construction of it is much improved. Likewise, club construction, using new design, materials and production techniques, has changed the game.

• The grip is the part of the club that you hold with your hands.

• The shaft is the part that connects the grip to the head.

Early clubs were made by hand, with craftsmen creating equipment to suit their clients. Carved from wood, early clubs could be found with different shapes. However, during the 19th century, long nosed clubs were popular, with shafts made of wood and spliced to the head with glue and thread. Club shapes changed gradually over the next few years, with plates added to the sole and inserts, made of harder materials, being cut into the face. Once a player had used their club a few times, they would return it for fine tuning.

Club heads made from iron followed wood and, until the early 20th century, the shaft continued to be made of wood. As the century progressed and the number of players increased, it was not practical for all clubs to be made by hand, the process took too long and was too expensive. Mass produced golf clubs then became the norm and players selected their clubs from the rack. Around this time, the steel shaft became popular and, from 1926, they were allowed according to the rules of golf.

Fast-forward to the late 1960s and clubs looked very different, cavities in the back of iron heads became common, shafts, although predominantly still made of steel, also changed, with graphite and titanium making their presence felt. Metal replaced wood as the chosen material for the construction of long hitting clubs.

The rules allow any player to take and use 14 clubs in a given round. The normal set of clubs is a mix of irons, woods and a putter – each club being designed to perform a different job.

• The putter is to be used on or just off the edge of the green.

• Iron clubs have different numbers such as three, four, five, six, seven, eight and nine. The higher numbered clubs cause the ball to fly higher and shorter than the low numbered irons. Some irons have letters on them: PW = Pitching Wedge, SI = Sand Iron and LW = Lob Wedge. These clubs are normally used close to the green.

• Metal-headed clubs are usually the longest clubs in your bag and they cause the ball to travel the greatest distance when hit correctly.

The ball has also changed from the original skins stuffed with feathers, through moulded balls and liquid centres wound with elastic, and covers made from different materials that help the ball fly, spin and wear. All balls must be a minimum size and a maximum weight, while the surface has small depressions stamped in, which help the ball to fly through the air.