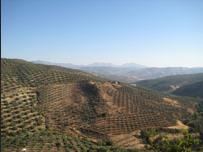 ENVIRONMENTAL ORGANISATIONS in Portugal have launched a campaign to protest against intensive olive growing following the announcement of a mega project for Herdade dos Machados, near Moura, in Alentejo, covering 6,101 hectares.

According to the organisations, led by Liga para a Protecção da Natureza, the country’s league for natureprotection, the “properties surrounding the area of the Alqueva Dam (in Alentejo) are being intensively bought by big economic groups, causing the overpricing of the land”.

This, they say, “makes it impossible for farmers to maintain more conventional farming techniques”, which they say are also more eco-friendly as “they are persuaded to sell their properties to escape difficult farming conditions”.

The purpose of the investors, the environmentalists claim, “is to develop huge resorts for tourism and mega agricultural properties with intensive farming production, especially those which use intensive irrigation”, which is the case of the olive growing plantations announced for Herdade dos Machados.

The planned project, which is expected to start in 2009, still requires approval from the ministers of Agriculture and of the Environment, due to the characteristics of the production.

For the environmental organisations, the situation is worrying, as experts say that olive oil is already leading consumer preference trends, compared to other oil products.

This type of intensive production, they say, “is responsible for profound changes to the soil, encourages erosion, destroys underground streams and uses herbicides and pesticides”.

A big part of Herdade dos Machados is included in Rede Natura 2000, an EU classification for preserved natural places. It is integrated in the Zona de Protecção Especial (ZPE), the special protected area for birds and other species, located in Mourão/Moura/Barrancos. The area is also listed as Sítio de Interesse Comunitário (SIC), a place of natural interest, of Moura/Barrancos. All these definitions are based on national and EU regulations which aim to preserve specific ecosystems.

The environmental associations are hoping that this will be taken into account by the government.

The project is managed by Casa Agrícola Santos Jorge (CASJ), which sold 50 per cent of its shareholding to Franlabora, a Portuguese holding owned by the Spanish group Âncora. The deal occurred in December 2007 and required an investment of 30 million euros from Franlabora.

The Spanish company started buying properties in Portugal in 2003 and is now in control of seven farming properties in different locations in Alentejo, in a total of nearly 8,400 hectares, following an investment of 140 million euros in the country. The properties are mainly dedicated to olive growing, wine production and cattle.

The Herdade dos Machados has been in the hands of the Santos Jorge family since 1875, which had one of the biggest olive growing plantations in the country for many years.

After the construction of Alqueva Dam, many Spanish investors have been buying properties in the region, many for real estate development but mainly for farming production. This is because they have reached their quotas in Spain for products financed by Agricultural Farming Policy of the European Union.

In the area surrounding the dam, intensive olive growing plantations already occupy about 45,000 hectares of the land. The investors are mainly Spanish, although there are also some Portuguese, like the Nutrinveste group, owner of Oliveira da Serra, one of the best selling olive oils in the country.