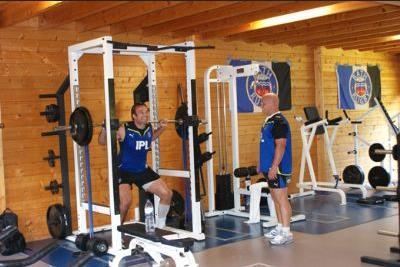 Bath rugby player Olly Barkley is set to miss the start of the season after breaking his leg during a training session at Browns Sports and Leisure Club in Vilamoura.

The 28-year-old England centre cracked the fibula in his left leg on July 23 and was taken to Faro’s Santa Maria clinic, before being discharged the same day and flying back to the UK with his team mates the following day.

Despite the injury, Stephen Meehan, Head Coach of Bath Rugby, said that he was pleased with the team’s stay at the Algarve sports facility: “We have been on many training camps before, but have chosen Browns for the second year running.”

He added: “The reason being it has everything we need right on site: accommodation, an outstanding pitch, well equipped heavy weight gym and quality catering.”

Barkley rejoined Bath after spending a season with local rivals Gloucester and has won 23 caps for England since his debut against United States as a 19 year-old back in 2002.

A spokesman for Browns said Bath also welcomed the public to go along and watch them train.

“There are some famous faces currently staying at Browns for some private pre-season training, but the staff are getting all of their plans in place as they await the arrival of the Munster Rugby Squad, who will be based at Browns from the August 5 to 12,” said the spokesman.

The teams stayed back to back earlier this summer to prepare for the season ahead.