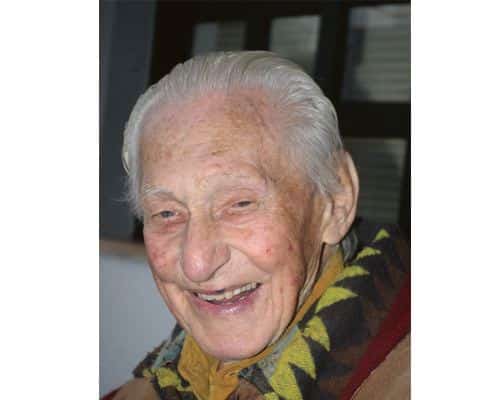 It was cause for a double and nearly a triple celebration. Charles’s granddaughter, Kelly, who lives in England, was also born on January 20. She gave birth to her first baby, a girl, last week.

In addition to a congratulatory message from Her Majesty the Queen, tributes will be paid at a special luncheon of the ‘Monday Club’ Charles founded five years ago to bring together long-term residents for monthly get-togethers in the Carvoeiro area.

Charles, the youngest son of the 11th Baronet Sir Edward Oswald Every, was born in Leighton Buzzard, Bedfordshire. He was educated at Harrow, one of England’s most distinguished public schools, but he disliked it because “the people there were too snobbish”.

In 1939, just before the outbreak of World War II, he qualified from London University as an architect, but soon found himself in the British armed forces and on his way to serve in India.

Charles’ architectural and town planning career began in earnest after the war in West Suffolk. After a couple of years, in 1949, he was on the move again, this time to South Africa where he successfully pursued his professional career for the next 21 years.

On eventually deciding he wanted a home in Europe, he started looking in Greece and worked his way westward.

“If I’d gone any further, I would have fallen into the sea,” he says.

The Algarve was his final destination. He fell in love with Carvoeiro in 1967, bought his current home on the outskirts of the village in 1970 and has lived there ever since.

His daughter Vanessa and son-in-law Terry de Beer moved from South Africa to join him almost 14 years ago. The family links with South Africa are intact through his grandson Ryan and two great-grandchildren.

Having long enjoyed landscape gardening, Charles developed a particular passion for cultivating water lilies. Gardening continues to occupy much of his daily life.

Asked to what he owed his longevity, the astute and quick-witted centenarian mentioned “moderation”, but added that it probably had more to do with family genes – “and good luck”.

Len Port is a journalist and author based in the Algarve. Follow Len’s reflections on current
affairs in Portugal on his blog:
algarvenewswatch.blogspot.pt