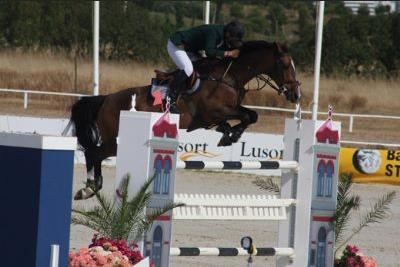 The Portuguese Equestrian Tour (PET), which began its annual sequence of international show jumping events in Lisbon over two months ago, reached its climax in Vilamoura last weekend.

The three-day meeting featuring 70 of the sport’s top performers representing 15 countries was dominated by Irish horsemen with Dermott Lennon taking the concluding Lusort Algarve Prize on his mount Hallmark Elite over the biggest 1,50m obstacles in 48.45s while only incurring a single penalty. 2002 World Cup winner and fellow Irishman Conor Swail on Gold Digger – six victories in total – occupied the runner-up spot while the Spanish combination of Alfredo Fernandez Duran and Ranino came in third.

For Great Britain Laura Renwick, generally regarded as the quickest in Europe and already ranked 140th in the world, achieved five podium finishes on her two horses Roller Coaster and Beluga as the Portuguese flag was once more kept flying by national champion Luis Sabino Gonçalves with two wins on board Donatella N and Inchala D’en Haut.

The three-star CSI show jumping feast carried a total of 100,000 euros in prize money, and results here in the Algarve as elsewhere on the PET tour count both towards 2009 Rolex Rankings and qualification for this year’s European Championships in Windsor.

In this context, the Vilamoura Equestrian Centre provides an excellent test for jumping’s elite, a fact emphasised by the quality of the course itself which is built by 34-year-old Bernardo Costa, already jointly responsible for the acclaimed obstacle designs at such major events as the Beijing Olympics, Indian Wells and the Dubai World Cup.