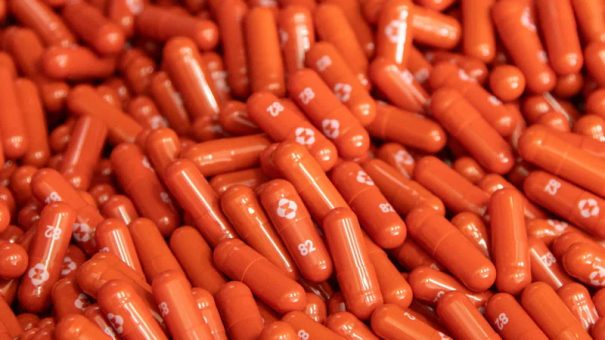 A new antiviral ‘wonder pill’ for people who have tested positive for SARS-CoV-2 and are at risk of developing serious disease has been given emergency use approval today by the European Medicines Agency (EMA).

The treatment developed by pharmaceutical giant Merck is designed to be taken twice a day for five days by people who are ‘ill’ but still at home (ie not seriously ill).

Named molnupiravir, the drug is described as reducing symptoms and accelerating recovery.

Say reports, it “could change the course of the pandemic, reducing the number of cases that need to be admitted to hospital and helping to contain outbreaks in poorer countries with fragile health systems”.

The UK has already authorised the drug, with health minister Sajid Javid describing the decision as “a historic day for our country … this will be a gamechanger for the most vulnerable…”

According to the American press, the positive aspect of this new treatment is that Merck is prepared to ‘share its licence’ with several Indian manufacturers and with a U.N. backed non-profit organisation, “to allow production around the world and help boost access to more than 100 low- and middle-income countries”.

Says the Washington Post, the move stands out in a pandemic “that has seen pharmaceutical companies lobbying to keep rights to vaccines”.

Merck’s pledge is that a global trial showed molnupiravir reduced hospitalisations and deaths by half among higher-risk coronavirus patients diagnosed with mild to moderate illness.

EMA tweeted at lunchtime: “We are ready to give advice to Member States so that they could make this new treatment available for emergency use, ahead of a marketing authorisation”.

Merck has said it can produce 10 million packs of the pills by the end of the year, although a lot of them have already been pre-purchased by various countries.