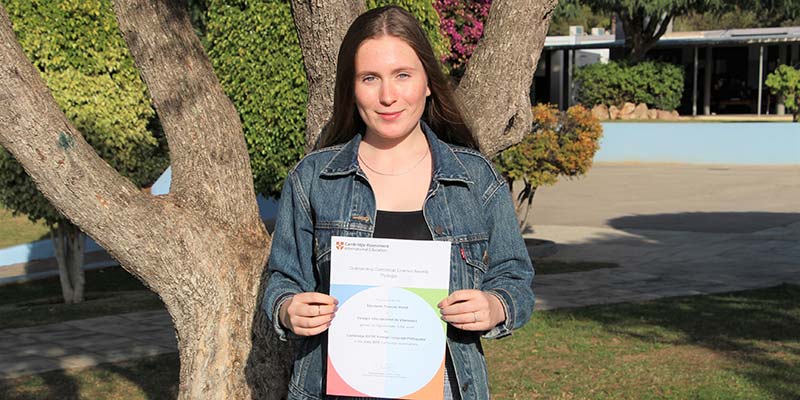 Elizabeth Hurst from Vilamoura International School (CIV) received the Top in the World prize in the “Outstanding Cambridge Learner Awards” – Portuguese Foreign Language, a distinction from Cambridge University which recognises the achievements of students who sit Cambridge Exams in more than 40 countries over the world.

Elizabeth, who is British, has been at CIV in the English Studies since Year 8. Her determination and constant focus on her future goals were evident from an early age.

“Elizabeth is a mature, polite and kind student who volunteers actively in various school events promoted by the Students’ Representative Council (SRC) as well as a dedicated member of the CIV Model United Nations (MUN) team. She has won various academic and merit awards both in and out of school,” said the school in a press statement.

At a CIV school assembly on November 22, Cidália Bicho, CIV Pedagogical Director, said: “It is extremely rewarding to congratulate Cambridge learners and teachers who have worked so hard to achieve tremendous success in the Cambridge IGCSE examinations. The results are a reflection of the enormous talent in Portugal not only amongst learners but also within the teaching profession. Learners from Vilamoura International School have a bright future ahead of them, and I wish them every success in their future.” Elizabeth received her “Outstanding Cambridge Learner Awards” at this assembly.

The Principal of Vilamoura International School Bruno Nande said: “Foreign Languages are a pillar of our educational project, and we are delighted to see that come to fruition as one of our students receives this most coveted award.”

Elizabeth Hurst has said that she was “extremely surprised” to receive this award. She has been learning Portuguese for eight years, and says that her dedication has a lot to do with the emphasis that her mother put on learning the language of the country in which they live.

“I still have some difficulties in expressing myself in Portuguese, particularly when it comes to verbs and vocabulary,” she said, adding that she tries to improve on these daily. “I practice Portuguese every day: during lessons, at school and a little with my sister; but no one else in my family speaks Portuguese.” To enrich her vocabulary, she reads a lot, preferring books that she has already read in her first language. She also has regular conversation lessons in Portuguese.

Elizabeth Hurst, who is considering Veterinary Medicine as a future career choice, intends to take an IGCSE in Portuguese as a First Language later this year, or in 2020.