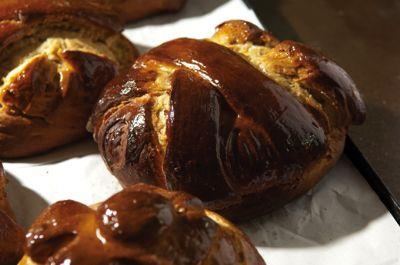 It is hard to pinpoint the origin of the Portuguese ‘folar’, but according to the legend, it all started when a young lady wishing to be married prayed to Saint Catherine for a suitor.

She got more than she bargained for and found two suitors at the same time – a poor farmer and an aristocrat – and her uncertainty about which one to choose caused a fight between the two men, forcing her to make a decision.

After choosing the farmer, the girl lived in fear of being persecuted by the aristocrat and she prayed once again to St. Catherine for protection, offering her flowers.

When she arrived home, she found a cake with whole eggs on top, as well as the flowers she had offered to the saint. The farmer and the aristocrat received the very same gifts and ended up reconciling.

Since then, it’s tradition for godparents and godchildren to offer each other a ‘folar’ during Easter as a token of friendship.

Made of flour, eggs, yeast, butter, a hint of fennel and topped with boiled eggs, the ‘folares’ are always in high demand at this time of year.

Padaria Central, one of the oldest bakeries in Lagos, established in 1906, is still one of the best places to buy the folar, as well as traditional almond cakes and Easter nests, a sponge cake covered with chocolate gratings and topped with egg yolk threads.

Teresa Dias has been managing the shop ever since she inherited it from her father-in-law. “In the old days, we would bake the ‘folares’ at least two months before Easter. Now we start preparing them two weeks in advance. Unfortunately, some old traditions are lost. People used to bake their ‘folares’ here at our wood burners and we used to chat and laugh whilst decorating our cakes.”

The folar sells at €7.5 a kilo at Padaria Central.