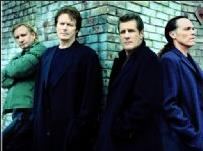 Legendary American band, the Eagles, will be spreading their wings on their latest world tour and performing a one off concert in Lisbon.

The band, most famous for singing Hotel California, is to perform at the Pavilhão Atlântico on July 22 2009.

The concert is part of a worldwide promotional tour for the new Eagles album, Long Road Out of Eden, their first studio album in 28 years which earned them a Grammy award for best country performance in February 2008.

Tickets for the concert cost between 35 and 55 euros per person.

For further information or to buy tickets for the concert please visit www.ticketline.pt