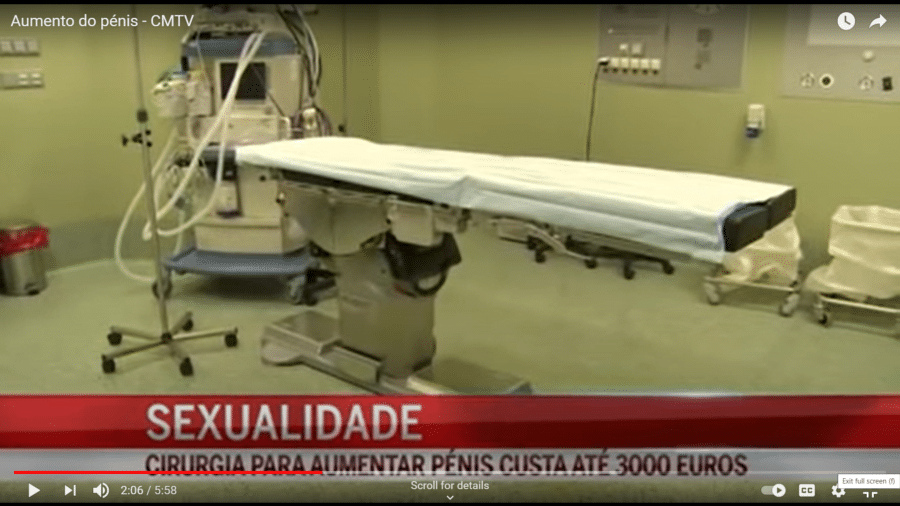 Judges in Lisbon have ruled that a well-known plastic surgeon should pay one of his clients €30,000 for the botched job performed on enlarging the man’s penis.

As a result of the news, a second man has come forwards to say he too will be suing the surgeon, as he has suffered a similar personal disaster.

Rui Fernandes, 53, elected to have surgery to increase the size of his penis in 2016. The “real ordeal”, as he described it, ended with an even smaller penis. One so small in fact that he says he can’t hold it in his hand.

The whole experience has lcompletely ruined his sex life. He tells Correio da Manhã that he hasn’t managed to be with a woman since the operation.

Rui Fernandes has only now found the courage to do something about the situation, says CM, “after learning that the surgeon (in question) has been condemned to pay damages of €30,000 for a similar error”.

He is accusing Zeferino Biscaia Fraga of negligence and “wants to take the case to Justice”.

Biscaia Fraga meantime has told CM that he will “give a reaction”. But at time of writing, this had not been forthcoming.

The surgeon has also intimated that he will be appealing the condemnation handed down by Lisbon judges for another patient whose operation in 2010 left him with “serious consequences both sexual and emotional, in terms of aesthetics and pain”.

Biscaia Fraga told the court that the patient “knew the risks inherent” in the procedure and had “abandoned the follow-up consultations”.

The Lisbon Tribunal condemned him nonetheless to pay a €30,000 indemnity, and this has now been confirmed by judges at the appeal court. The surgeon, however, has said he will be appealing the decision to the Supreme court.

In an earlier feature broadcast in 2004, CM’s television channel CMTV reported that every year 300-400 Portuguese men resort to plastic surgery to enlarge their penises.

The procedure most frequently used is called ‘lipoplasty’. It takes a little more than an hour under general anaesthetic, doesn’t require a hospital stay and costs from €1,000 to €3,000. The operation has a success rate of 95% and ‘works miracles’, said the CM anchor, going on to feature the work of exactly the surgeon who today is under such criticism.