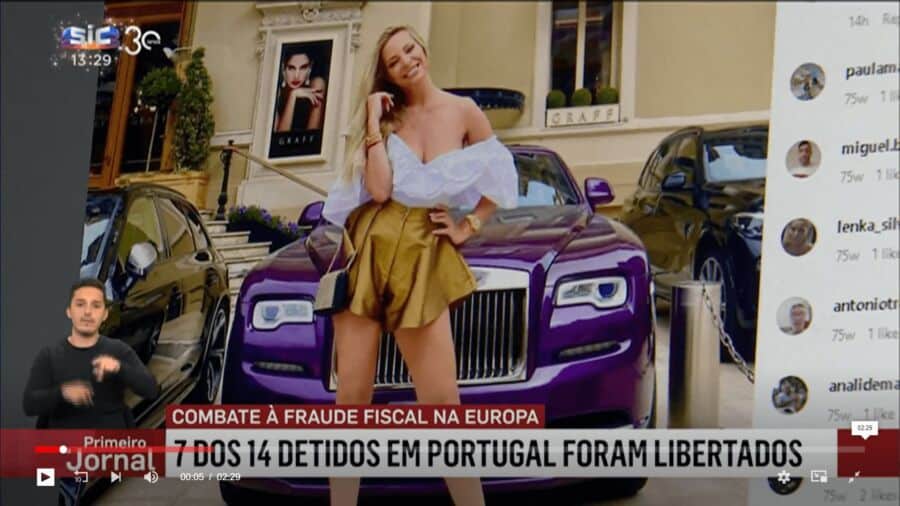 Since PJ police broke the news in Portugal of an alleged €2.2 billion IVA (VAT) fraud taking in various European countries, as well as 3rd countries, national media has been peppered with stories, particularly relating to two of the suspects – a husband and wife team, he Max Emiliano de Oliveira Cardoso, a Luso-Frenchman already condemned for corruption, she Ana Lúcia Matos, a former television presenter.

Today news is that Ana Lúcia Matos at least is among eight of the 14 people arrested four days ago who finally get to go home and sleep in their own beds.

The remaining six, including Mr Cardoso, are staying behind bars.

According to reports, it was “the bank account of (Numbers Station) a company controlled by Max Cardoso that served as a vehicle to hide millions of euros from the IRS.

“In just two years, Numbers Station will have kept more than €2.2 million in unpaid VAT and IRC.

“Thanks to a bank alert, the Portuguese justice system managed to seize €3.2 million from the company’s accounts. This is just a crumb of the hundreds of millions of euros that the criminal group will have made”, writes Jornal de Notícias.

It is understood that Ana Lúcia Matos is one of only five suspects who “accepted to give evidence in court”.

She has reportedly denied being involved in the alleged criminal network, albeit she is suspected of having run the Numbers Station bank account, says JN.

For now, the investigation remains ongoing.

It is not clear how long the suspects who have not received bail will remain in preventive custody. SIC refers to a custodial sentence having been handed Max Cardoso by a French court. Whether or not he now faces extradition proceedings has not been explained.

Expresso yesterday described “millions under suspicion in Deutsche Bank”, suggesting that investigations in Portugal led to the Portuguese branch of Deutsche Bank where millions of euros were held by a “group of Portuguese and French citizens, known as the Portuguese cell” of this alleged criminal network.

According to the paper, the cell “counted on the complicity of a manager of this bank”.

As the paper recalls, it was in Coimbra that authorities first detected the  ‘octopus’ that “covered 17 countries in Europe and caused damages in unpaid IVA of €2.2 billion”.

“The head of the octopus is in Europe”, Portuguese prosecutor working in Europe José Guerra has explained, “but it was in Portugal that the knot started to be untied”.

As initial reports on this probe have explained, 14 people were arrested last Wednesday suspected of criminal association, qualified fiscal fraud and money laundering.