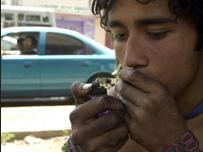 Residents living near the Portuguese Ministry of Foreign Affairs have complained to Lisbon police that their neighbourhood is turning into an illegal drug store.

People living in Rua Possidónio da Silva have asked for a permanent police presence to patrol the area and eradicate the problem.

Complaining that their lives are being turned into a living hell, an appeal has also been made to the president of the Junta de Freguesia dos Prazeres, João Magalhães Pereira (PSD), who believes that the city’s worst drug problem exists in the street running from the Council of Ministers building down to the Palácio das Necessidades.

The Junta de Freguesia dos Prazeres believes that the problem is restricted to that area and therefore could easily eradicate it if there were enough police in the area to deal with the problem.

“This was a peaceful area with mainly elderly people, but in two years it has turned into a serious drug peddling zone with addicts queuing up for 15 to 20 metres to buy drugs,” said one anonymous resident.

The residents also complain that the problem is only dealt with when there are important state official visits at the nearby Ministry of Foreign Affairs.

PSP Police Commander, João Luciano, told the Lusa news agency that the police had already made hundreds of arrests, but that they simply didn’t have the manpower or financial resources to have a permanent presence in the street.