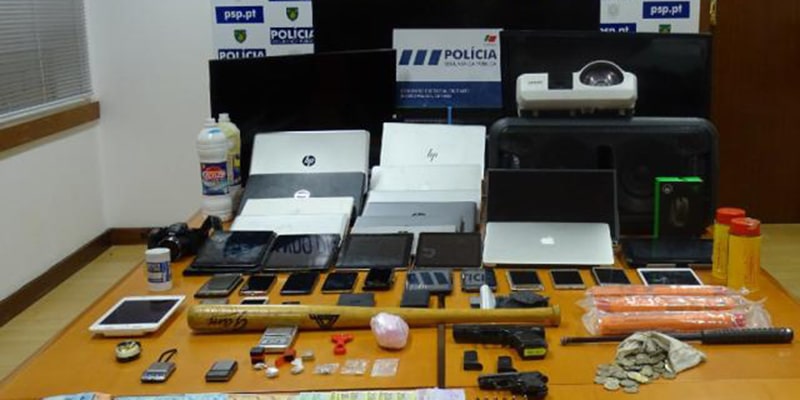 Three people were arrested by the Algarve’s PSP police last weekend, including a suspected “drug-dealing couple” based in Faro and the leader of a pick-pocketing group that operated in the Algarve.

The arrests were made following two separate investigations, the first of which involved a couple which were suspected of dealing drugs in the town of Faro.

In a statement, the police force say “suspicions were confirmed” during a house search which saw officers seizing a huge amount of drugs, including “584 individual doses of cocaine, 47 doses of heroine and 3.22 grams of MDMA as well as a variety of drug-dealing paraphernalia.”

Also confiscated were weapons and several “electronic devices” such as TVs, tablets and smartphones which police believe were stolen.

PSP Faro say that anyone who has had these kinds of devices stolen recently should go to the PSP station in Faro to see if the confiscated items are theirs, and if so, present proof of ownership.

The other arrest happened in Spain after PSP police in Portimão identified a “group of foreign pick-pockets who had been committing crimes for at least 18 months in Portugal, especially in the Algarve”.

The group would “discreetly approach victims when they were inserting their PIN numbers to pay for their shopping at big commercial establishments”, said PSP police.

Once they had the number, they would “surgically steal the bank card” while their victims were moving their shopping into their vehicles.

The group would then withdraw money or use the cards to pay for their purchases, having spent “hundreds and, in some cases, thousands of euros of victims’ money”.

Although most of their crimes were committed in the Algarve, the group was based in the south of Spain.

PSP police collected enough evidence to link the group to “over 20 crimes” which allowed the force to request a European arrest warrant for the 55-year-old alleged leader of the group, who was extradited to Portugal. He will await trial in preventive custody.