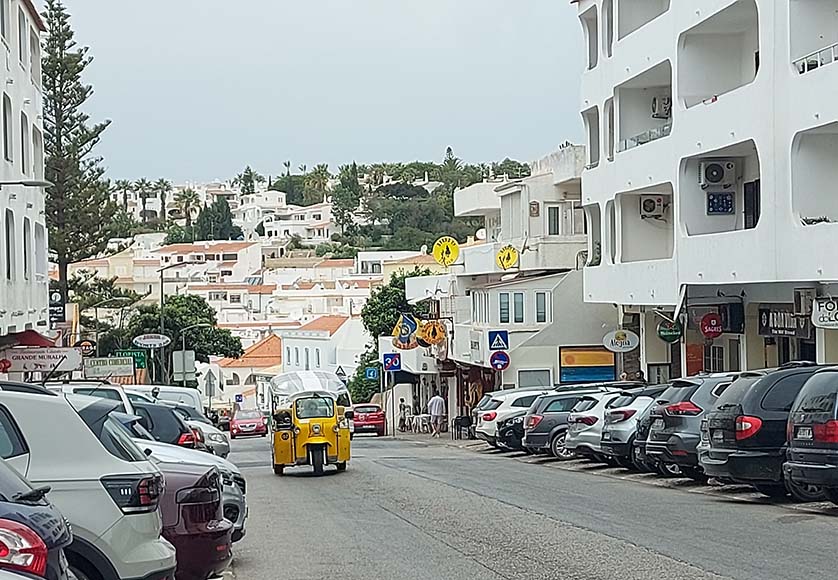 Reports of drugs being sold ‘out in the open’ in some of the Algarve’s main tourist hotspots are growing by the day, as calls for more policing to keep lawbreakers in check continue to fall on deaf ears.

A TVI reporter witnessed one of these situations first-hand last weekend in Carvoeiro, where a group of men were caught on film selling drugs to tourists in the middle of one of the town’s busiest streets (Estrada do Farol, or ‘restaurant hill’). This happened at around 11pm on Saturday night in plain sight.

Said the reporter, certain members of the group were leaning against a wall near their car, while others seemed to be tasked with approaching tourists at a time when nearby restaurants, bars and businesses were packed with customers.

If a ‘client’ showed interest, another member of the group would appear to show them the drugs. The deal would then be completed on the spot, right in front of scores of families and children.

GNR police said they were unaware of these incidents and would investigate, although the Resident knows this is not a one-off situation. Several readers have contacted us reporting similar cases not only in Carvoeiro but also in other parts of the Algarve.

The string of beach festivals held at Praia da Rocha in Portimão has also attracted large number of street drug dealers to the tourist hotspot, many of whom would attempt to sell in broad daylight in full view of anyone walking by. Albufeira and Vilamoura Marina are also among the other spots chosen by drug dealers.

Meanwhile, a local resident in Carvoeiro has told us that the lack of policing in the town has only been getting worse over the years.

“With the previous GNR sergeant everything went very well, there were no major issues in Carvoeiro. But since he left, the presence of GNR officers in Carvoeiro ended,” the resident said.

“It’s a disgrace. Drug dealers stop cars in the middle of the street to sell. The GNR are called but they don’t show up, as they say they don’t have enough agents. Carvoeiro has been abandoned,” the resident lamented.

Last month, a GNR lieutenant colonel warned that police numbers in the Algarve were “well down on what mayors had been told”, which was followed shortly after by a GNR statement guaranteeing that it is attempting to boost agent numbers but that there are “no issues that jeopardise safety or patrolling in the Algarve”.

This, however, does not seem to be the case.

Lagoa Mayor Luís Encarnação is well-aware of the lack of policing that is plaguing the popular tourist town of Carvoeiro and says that he has brought the matter to the attention of several entities – including GNR’s territorial command in Faro – but so far to no avail.

“We have been told that authorities are aware of these issues and are following them closely,” Encarnação told the Resident.

He also said that some cases have been linked to the fake drugs phenomenon – in other words, supposed drug dealers selling “drugs” which are in fact bay leaves.

“It is obvious that if there were a stronger police presence, these situations could be prevented,” said the mayor, adding that these cases create a “bad image” for what is otherwise a “tourism destination of excellence”.

The mayor also revealed that the local council has been waiting for over a year and a half on government approval to create its own municipal police force.

While municipal police are not the force designed to handle drug dealing issues, the mayor believes that their presence alone in the town would dissuade drug dealers (or fake drug dealers) from so blatantly carrying out their illegal activities.