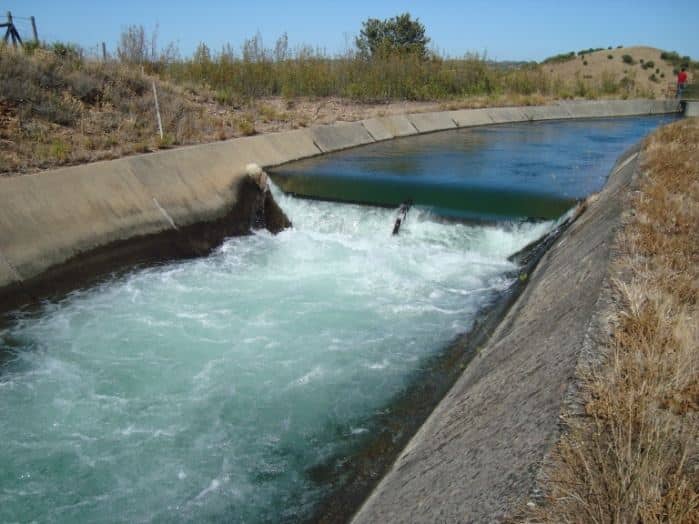 It is the scandal that country people on the Algarve/ Alentejo border have had to put up with for decades. Yet every time the country is the grips of drought – as it is now – the issue truly gets under their skins.

Wildfires this year have been ‘off the scale’ for their intensity, damage and loss of life.

Water usage restrictions are in force in the Alentejo, boreholes are running dry – and yet in a rural corner of Rogil, in the borough of Aljezur, the sound of hundreds of thousands of litres of water racing unchecked into the sea keeps landowners with a conscience awake at night.

Writing on social media this morning rural tourism business Quinta Pêro Vicente explains: “The country is in the grip of severe drought. Dams are down to the minimum, but tonight we heard yet another rush of water going from Rogil to Praia da Barradinha.

“You cannot get away from the sound of waste from the “Perimetro de Rega do Mira” (Mira dam irrigation system), while Santa Clara’s dam is at a critical low – and it’s all down to an absence of political will that perpetuates the ruinous management of our water.

“There are rational technical solutions to this issue, but the power of the half-dozen of people in charge means that nothing gets done.

“Investments? Yes, those go ahead here – but only to benefit intensive agro-industrial ‘greenhouses’ that are environmentally catastrophic”.

It is a post that resounds with the echoes of decades of failed attempts to bring authorities to their senses.

Público too has done its bit, putting the wastage at “two million litres per hour” in a text printed in 2008.

But still the water rushes into the sea.

Environmentalists fear that no-one in power – or seeking to gain it – will see the issue as ‘sexy enough’ to get involved.

So what exactly is the Mira irrigation system?

It is a channel, launched in the 60s to supply 2,500 farmers from Vila Nova de Milfontes to Rogil with water.

As Público’s article explains, the channel’s source – Santa Clara dam – is 40 kms away, fed by the Mira river in the Serra do Caldeirão.

The water takes 15-20 hours to travel to the agricultural properties for which it is intended, and as no-one has devised a way of ensuring that all farmers irrigate at the same time, the solution has been to keep “almost 800 kms of irrigation pipes flowing with water”.

Similar systems in Spain have already been ‘modified’ to ensure water conservation.

A former president of the Mira water-users association told Público in 2008 that there are all kinds of options, including ecological ‘holding’ channels which could pump the water back for reuse.

Intensive farming sources too have called for ‘dams’ to save the water.

But at the time of Público’s inquiries, the paper reported that “the Ministry of Agriculture as well as the Alentejo branch of the CCDR (commission for regional development) did not answer our questions about the elevated losses of water”.

Indeed, Público added that besides wastage from the channel itself, as much as 55% of water was lost in the pipes leading from it.

“It is a complete scandal”, said Quinta Pero Vicente proprietor Vítor Faustino told us. “And yet no one ever talks about it”.

The Resident hopes to question council bosses and the CCDR this week, to see if anyone these days feels prepared to talk. It is an election year, thus this is an issue that could conceivably be viewed as relevant.

Sea and Atmosphere institute IPMA has released data classifying 9.2% of country in extreme drought, 69.6% in severe drought and 16.5% with only moderate drought.

The worst affected areas are those of the Alentejo, through which the Mira irrigation system transports its millions of litres on their way to discharge into the sea.

Environmental association ZERO adds that the country’s “national plan for the efficient use of water” has been “left in a drawer for four years” even though, by law, water efficiency measures should be evaluated regularly.