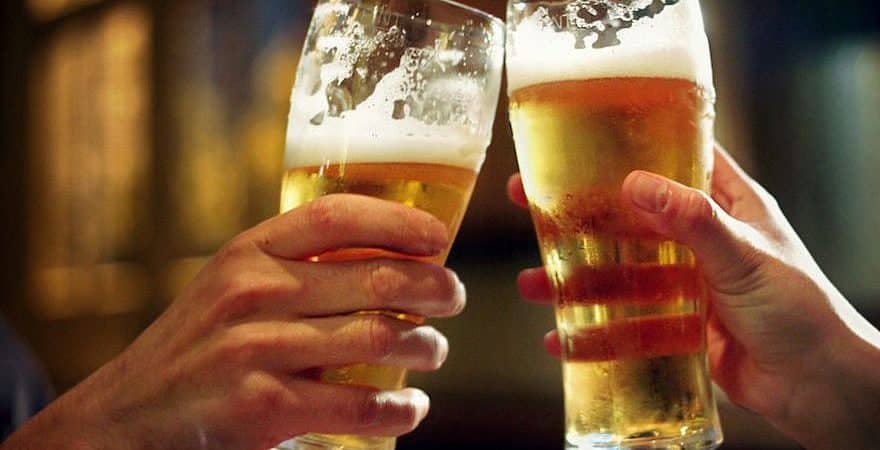 Portugal’s week has started with the very best news for beer drinkers. A Porto study has concluded beer “doesn’t make you fat” and is beneficial for the intestines.

In short, beer is good for your health!

Say reports: “investigators from CINTESIS (the centre for investigation in health technology and services) in Porto have concluded that beer improves gut microbiotica, a factor that has been associated with very common chronic diseases like obesity, diabetes and cardiovascula diseaser”.

The full study can be read here. It has been published in the Journal of Agricultural and Food Chemistry, and also involved investigators from Lisbon’s NOVA Medical School – Faculty of Medical Sciences.

Says a press statement: “In this double-blind study, 19 healthy men were randomly divided into two groups who drank 11 fluid ounces of either alcoholic or non-alcoholic lager with dinner for 4 weeks. Researchers found that the participants’ weight, body mass index and serum markers for heart health and metabolism didn’t change during the study. But at the end of the 4-week period, both groups had greater bacterial diversity in their gut microbiome and higher levels of fecal alkaline phosphatase, indicating an improvement in intestinal health (…)  based on this pilot study, researchers say that consuming one bottle of beer, regardless of its alcohol content, may be beneficial to the gut microbiome and intestinal health of men. However, they add that because the safest level of alcohol consumption is none, non-alcoholic beer may be the more healthful choice”.

The study also established that the ingestion of beer “did not interfere significantly with cardiometabolic biomarkers” like glucose, cholesterol and triglicerides.

“Curiously, alkaline phosphatase, an important biomarker of liver, kidney and bone damage, decreased during the course of the trial”, adds CINTESIS, stressing the benefit of beer on intestinal health “proved to be independent of alcohol content”.

According to Jornal de Notícias, investigators “believe that the beneficial effect of beer could be related to polyphenols present in the drink, very similar to what happens with red wine…”

The study was led by investigator Ana Faria and Conceição Calhau.