I recently took a long overdue week’s holiday to catch up on some DIY and household chores.

On my first morning, whilst trying to decide which job to tackle, I was admiring our handfasting chord, hanging on the bedroom wall, which I made for our wedding. Our fifth anniversary was imminent and, out of the blue, I decided to make another chord into a celebratory dreamcatcher.

I researched internet pictures and then enthusiastically went to buy my supplies. I was suddenly in paradise and spent hours choosing from the huge selection of beads, ribbons, threads and wool available for craftwork.

Totally engrossed, I spent the next three days working on my elaborate anniversary gift adding the same ribbons, charms, flowers and butterflies of our wedding.

Ideas flowed and I then made another larger hoop to hold our wedding vows.  Both are full of personal symbolism, and I enjoyed the craftwork so much that I set up a permanent craft desk in the lounge, planning to make them for my family and friends. Consequently, I did nothing else that week!

What is strange is that I have never owned a dreamcatcher before nor had any interest in them. However, now that I have read about their origins, I appreciate that they are more than just a pretty decorative item.

Did you know that dreamcatchers originated in the Native American Ojibwe tribe who call them ‘asabiskeshiinh’, which means spider web? The tribe’s history, traditions and culture are fascinating, full of spiritual beliefs, sacred objects and ceremonies.

Ojibwe elders have passed down their stories, traditions, songs, memories, etc, in oral form or depicted on ancient birch bark scrolls many of which are preserved by their Midewiwin (Grand Medicine Society) run by spiritual advisors and healers.

The Ojibwe believe that they are guided through life by the spirits, also, that every object has a spirit and that nights are filled with dreams that are caught by the dreamcatchers.

Two stories exist as to the origin of their dreamcatchers.

The first is that Asibikaashi, a spider woman and custodian of the Ojibwe, was unable to continue alone to protect all the tribe members when they began to migrate across North America. Women were, therefore, tasked with making the webs with protective charms to guard infants by capturing any harm surrounding the child.

The second story is of a grandmother who everyday watched a spider spin its web above her bed. One day her grandson wanted to kill the spider, but the grandmother would not allow him to hurt it. The spider thanked the grandmother for her protection and spun her a web that would ‘hang between her and the moon so that when she dreamed, it would catch bad thoughts and protect her’. 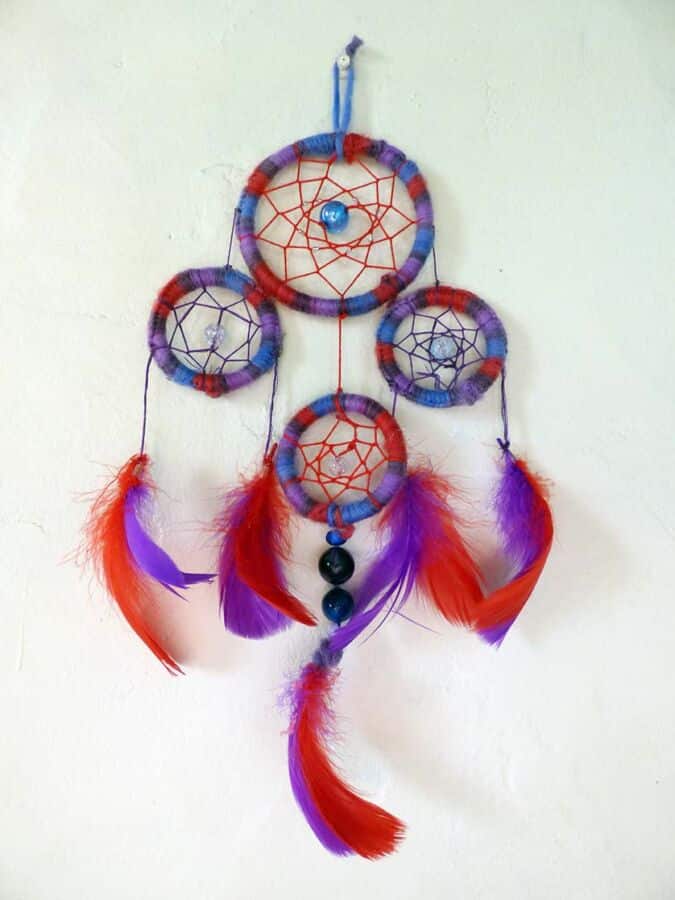 With inter marriages and trading, the Lakota tribe also adopted the dreamcatchers, and their legend tells the story of how a spiritual leader met the wisdom seeker and trickster Iktomi who appeared in the form of a spider.

As Iktomi spoke to the leader, he began to make a web in a willow hoop which was decorated with feathers and beads. Iktomi talked about the circle of life and how throughout life people are steered by good and bad forces and should always follow the direction of the good forces in harmony with nature.

Iktomi explained that the finished web was to be used to help the people reach their goals as their good dreams and visions would be caught in the web and thus hold the individual’s future destiny. This is the opposite of the Ojibwe legend where the web traps the bad dreams.

Customarily, the tribes hang the dreamcatchers above infants’ cribs and the children keep their dreamcatchers for life as a good-luck amulet. 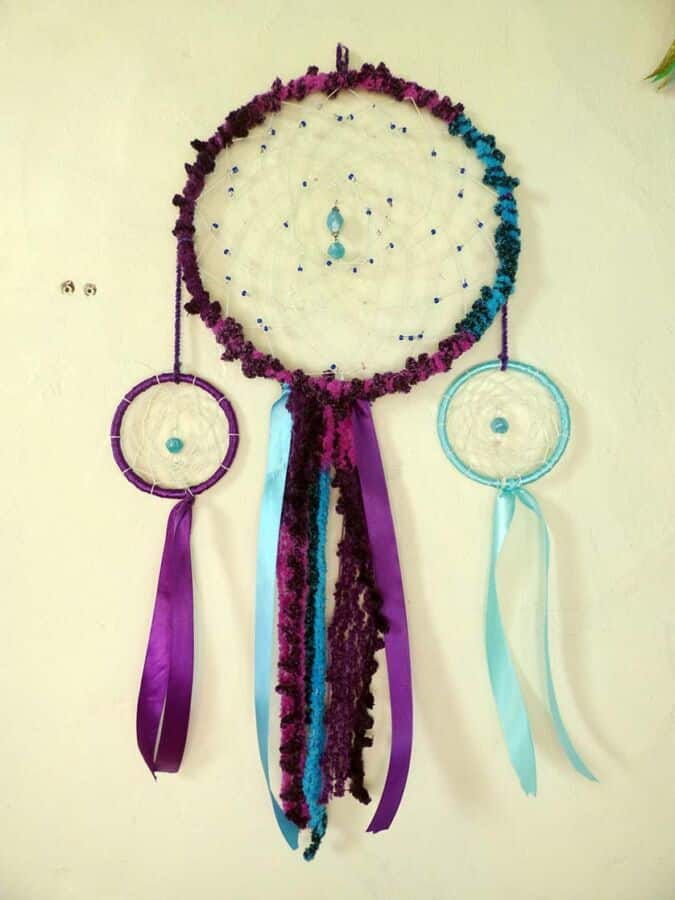 Original dreamcatchers were full of symbolism and were made from fresh willow twigs bent into a circle to represent strength, unity and the circle of life, so significant to the Ojibwe who believe that the spirit lives on after death.

The web beads represent the trapped dreams whilst the middle bead is seen as the spider and also symbolises the one creator in the web of life. Eagles are viewed as spiritual and so the feathers are spiritual signs and symbols of Native American culture. Sometimes arrow heads were added for increased strength and protection.

The Ojibwe believe dreams deliver spirit messages for guidance and protection. They often carry charms to represent symbols shown in their dreams and their dreams are shared with the community to give an insight into the past and as prophecies for the future. Individuals use the power of prayer, fasting and meditation to bring good dreams that will provide spiritual guidance and often newborns’ names are seen in dreams.

I dream almost every night, whole complicated stories which I vaguely remember in the morning. Yet, despite scientific research, it is still unclear why we dream.

On average, we dream two hours per night, and we usually remember dreams had during the rapid eye movement (REM) sleep period. 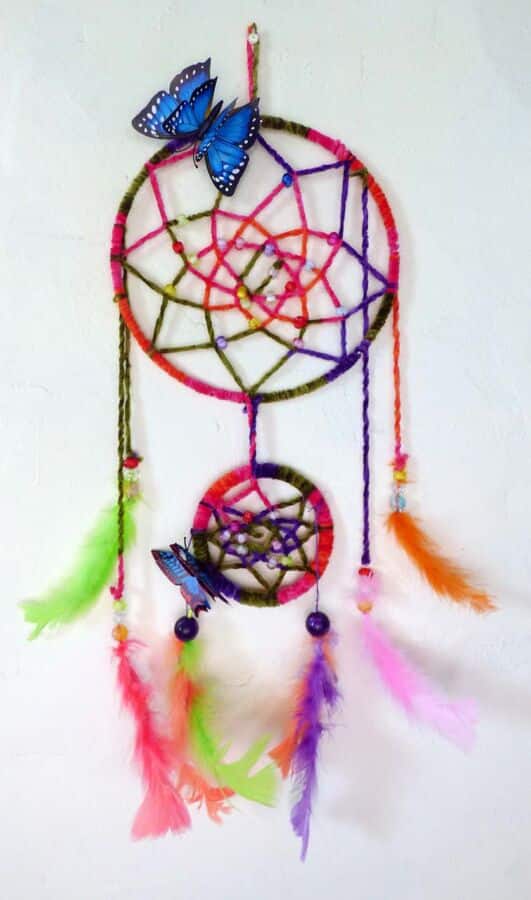 Dreams involve images and thoughts and are necessary for our wellbeing.  They can be clear or confusing, happy, sad or frightening. It is believed dreams allow us to confront potential situations, to process our desires and emotions, our memories and information gained during the day and even to promote creative thinking.

In the 1960s, dreamcatchers gained popularity as a decorative item and can now be bought almost everywhere. However, it is believed by many that this is an exploitation of the Indigenous culture and misappropriation of the spiritual significance of the dreamcatchers.

Since I made my first ones, which are not hanging above the bed, I have had many complex stressful a dreams. A coincidence? Who knows, but I am superstitious enough that I now feel that I must respect and honour the spiritual meaning of the dreamcatchers and so, just in case, I am making a more traditional one to hang above the bed and hope from now on that my dreams will all be good ones…

Isobel Costa works full time and lives on a farm with a variety of pet animals! In her spare time, she enjoys photography, researching and writing