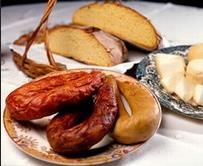 ONCE AGAIN, Monchique will be the setting for the Feira dos Enchidos Tradicionais, an event showcasing sausages made from traditional recipes, taking place this weekend (March 4 and 5).

As well as the delicious sausages, visitors will have the opportunity to taste other typical produce from the mountains including desserts, honey and liqueurs. There will also be a display of locally made handicrafts. The now popular gastronomy show will be supported by key restaurants in the borough, namely Palmeirinha dos Chorões, A Casa da Nora, A Charrete, Ofernando, Teresinha, O Luar da Fóia, Jardim das Oliveiras and Quinta de São Bento.

Over the two-day event, there will be plenty of entertainment on offer including displays by folklore troupes and a performance by famous Portuguese impersonator Fernando Pereira, whose show is set to begin at 7pm on Sunday.