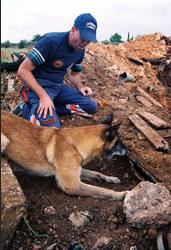 Voluntary canine search and rescue team, Equipa Canina de Resgate do Algarve (ECRA) is on-call 24hours a day, 365 days a year to support bombeiros and civil protection units throughout Portugal in the event of an accident or disaster.

Based in the Algarve, the team was founded in July 2005, by Luís Pacheco and his wife, Carla Correia. ECRA is a non-profit making organisation, set up to train dogs and their handlers the art of search and rescue so that, in the event of a natural or man made disaster, the dog and handler teams are on hand to support the search and rescue operation.

ECRA currently has nine dog and handler teams, six male and three female handlers. The handlers are everyday people, who have undergone the course that the ECRA offer, to train them in this most worthwhile skill. Several of the handlers are volunteer bombeiros.

The dogs have been trained to seek out injured people in the event of natural disasters, such as earthquakes, floods or tornados, as well as man made accidents.

The dogs, both pure and cross-breeds, as well as the handlers, have been extensively trained in searching vast areas of land to locate missing persons. Quarries and rough terrain are used for training purposes to reconstruct disaster sites, so that the dogs can search through rubble or debris to locate people who are trapped.

Two weeks ago, ECRA organised a live demonstration weekend in Tavira, which brought together similar canine search and rescue teams from Lisbon, Braga (northern Portugal) and Leiria (central Portugal), as well as teams from Spain.

Members of the ECRA had a meeting with Tavira Câmara president, Macário Correia, in the GNR barracks of Tavira, which was followed by a search and rescue reconstruction from the dogs and their handlers, which was filmed and broadcast by national television station RTP. The team also attended Scruffts dog show a few weeks ago in Lagoa, where they demonstrated their search and rescue skills for the crowds of dog lovers during the lunch interval.

ECRA’s objectives are to offer training to dog and handler teams in search and rescue operations. They have completed a great deal of training over the last six months, creating different scenarios that both dog and handler may face in real life. They also offer dog therapy to help people with special needs.

The team has strong connections to European and world organisations, such as the Red Cross.