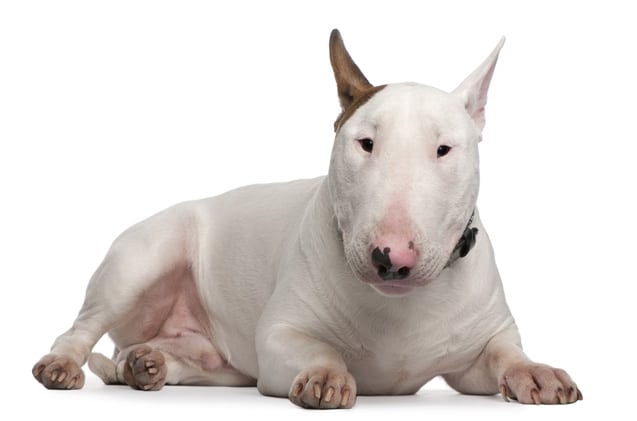 A dog owner – who was seated in the open back of a car with his Bull Terrier when the daughter of (former) friends tried to stroke it and was bitten badly on the face – has been condemned to pay damages of €22,000.

According to appeal court judges, the open trunk was ‘equivalent to being on the street’.

Say reports, once the owner was condemned in an initial prosecution for negligence, the child’s parents advanced, in their daughter’s name, with a case for civil damages.

The court heard how the little girl – aged four at the time of the attack – had been left with a severely disfigured lip and scar that could only be cosmetically dealt with when she reaches adolescence.

Ruling in her favour, the court condemned the dog’s owner to paying up €22,000 plus interest.

The incident happened over seven years ago, in Brandoa, in the borough of Amadora.

Bull Terriers are not on the national list of ‘dangerous breeds’, but the law is that in a public highway, dogs must be either on a lead or muzzled, and this animal appears not to have been either.

Say reports, it’s unclear whether he was on a lead. The first court certainly “accepted as proved that he wasn’t”.

The two-sides’ accounts of how the bite happened, also differ. The parents’ version is that they asked if the child could stroke the dog and the owner agreed. The owner denies this, saying he didn’t reply. But the panel of judges ruled that not replying ‘implied agreement’ as the owner “did not alert (the family) to any danger”.

Diário de Notícias explains the two sides are clearly no longer on friendly terms, but queries “is an open trunk of a car really a public place?”

The owner of the Bull Terrier certainly did not think so, and tried appealing the condemnation of the earlier hearing. But the judges are adamant: “A dog, even if he is seated in a private vehicle in a space that is not confined, but open to the public highway, allowing him to lunge at whoever passes, means the defendant did not take the precautions that the situation demanded”.