Portugal Resident
Home Covid-19 Doctors and Scientists speak out against Covid policies in eight languages, including... 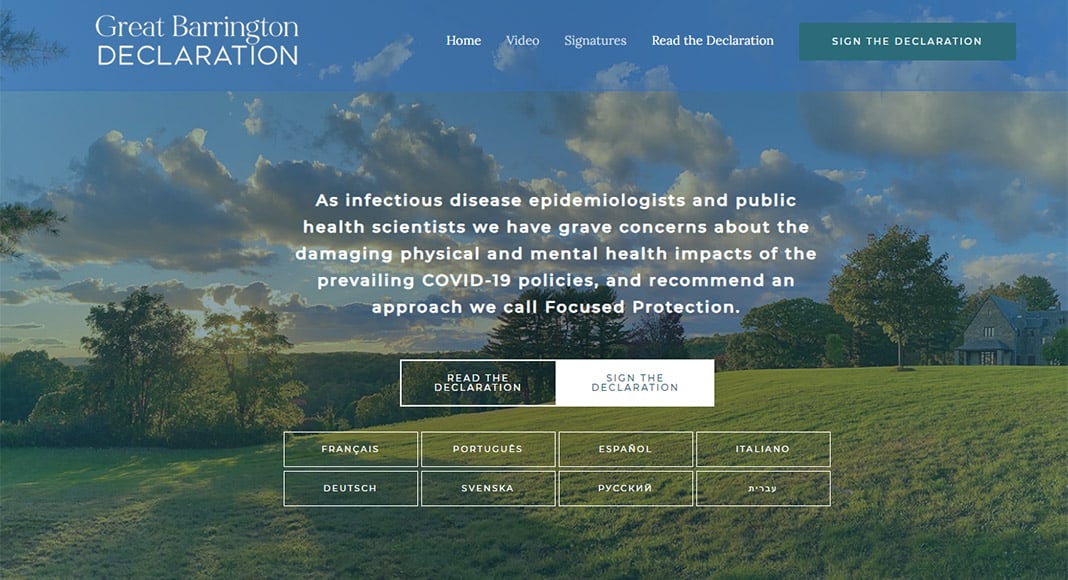 It has been dubbed the Great Barrington Declaration – for having been signed in Great Barrington, USA, earlier this week by a group of doctors and scientists – and it sets out to denounce “the damaging physical and mental impacts of prevailing Covid-19 policies”, recommending instead a different approach.

Currently circulating the world, and being ‘signed up to’ by thousands, the declaration comes at a time in which populations throughout the globe are beginning to turn against what they see as ‘Nanny state’ governments enforcing endless lockdowns and restrictions that seem to do very little to stem the course of the virus.

A link to the declaration can be found here.

But essentially it says what so many have been feeling: that current policies are producing devastating effects on short and long-term public health.

Excess mortality in Portugal is already way over anything that can be blamed on Covid-19 (click here) – and the SNS health service has a backlog of delayed surgeries stretching into the many thousands. Authorities accept that some of those delayed surgeries will have fatal effects.

And much as there’s a lobby that recoils in horror at the notion of the policy of herd immunity, this Great Barrington group is convinced it is the only sensible way forwards.

The declaration explains: “The most compassionate approach that balances the risks and benefits of reaching herd immunity, is to allow those who are at minimal risk of death to live their lives normally to build up immunity to the virus through natural infection, while better protecting those who are at highest risk. We call this Focused Protection”.

“Restaurants and other businesses should open. Arts, music, sport and other cultural activities should resume. People who are more at risk may participate if they wish, while society as a whole enjoys the protection conferred upon the vulnerable by those who have built up herd immunity”.

As communities everywhere kick back against restrictions that are clearly killing more people than the virus itself, it remains to be seen what effect, if any, the Great Barrington Declaration will have.

Portugal is not alone in having groups dedicated to ‘raising awareness’ on the deep downside of the State’s current response. But in our case life has not been anything like as badly affected as, for example, the everyday in UK.

Nonetheless, ‘figures’ here are far from inspiring: the number of people admitted to hospital is well up (to 801 in the last 24 hours), serious cases in IUC are well up (to 115) and deaths, though consistently in the main in the over-70 and 80-plus groups, are creeping upwards (10 in the last 24-hour period).

Talking today (Thursday), minister for the presidency Mariana Vieira da Silva said that next week the government will have to review the rules currently in place. However she stressed “the numbers we’re seeing now are the numbers we knew would be coming”, particularly in view of schools having recently reopened.

There have been ‘expert voices’ against its message, but the truth is that it is resonating  with many, many people throughout the world.