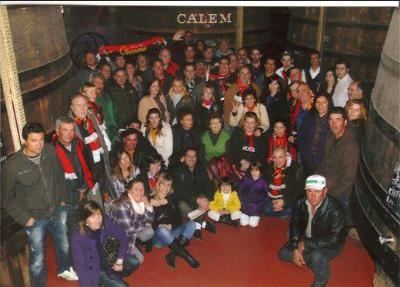 More than a hundred fans made the seven-hour trip to Porto for the important game against Boa vista at the weekend.

Despite finishing 9th in the top flight last season, the ‘Black Panthers’ were relegated to the Liga Vitalis due to bribery of referees in 2003-4, through their involvement in the Apito Dourado corruption scandal.

The travelling contingent had a weekend to remember, which included being part of the 48,000 crowd that watched the Porto v Sporting match on the Saturday evening. A Sunday morning cruise on the Douro and a visit to a port lodge got everyone into the right spirit before arriving at the impressive Estádio do Bessa, which was rebuilt for Euro 2004.

It is sad to see Boavista languishing near the bottom of the league considering their illustrious history. The highlight is still the brilliant UEFA Cup run in 2003 when they were knocked out by Celtic in the semi-finals.

Olhanense were lively in the opening stages and it was no surprise when Djalmir gave them the lead after 11 minutes, his first goal since early January. Five minutes later he added a second and the vociferous Olhanense fans were witnessing the team play their best football since the first-half of the game against Benfica in the Carlsberg League Cup quarter-final.

Boavista, at times, were left chasing shadows and midway through the second-half a long diagonal ball from Rui Duarte was masterfully controlled by Under 21 international Ukra. His pass found Toy who fed Djalmir and his clinical finish gave the visitors a 3-0 lead. This brought Djalmir’s tally to 14 for the season.

A minute later Ukra wrapped up the points when his angled shot went in off the post. Olhanense took their foot off the pedal and the home side scored a consolation goal when Diogo Fernandes fired home a free kick from 30 metres.

The 4-1 victory was Olhanense’s biggest win of the season and Boavista’s heaviest defeat. A solid performance from the Olhão based team that keeps them two points behind Santa Clara, at the top-of-the-table, who won 2-1 at Gondomar.

To help mark International Women’s Day on Sunday, SCO Olhanense are offering free admission to all women, so why not go along to the José Arcanjo Stadium, behind McDonalds on the EN125, where you are assured a warm welcome by this friendly and family orientated club. Kick-off is 3.00pm and the opponents are Desportivo Aves.

To commemorate the day’s historic importance it is now a public holiday in Russia.