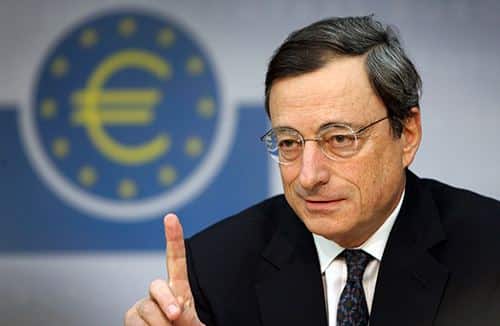 Economists are divided over the latest moves by ECB boss Mário Draghi to snuff out deflation risks in the eurozone and kick-start growth.
As Draghi admits that the package of cuts – which takes the euro to a 14-month low – did not have the unanimous support of the ECB’s governing council, pundits warn of a two-speed divide emerging, with Portugal firmly in the portion that is struggling to keep up.
Explained one: “Those countries which have adopted painful labour market reforms during the euro crisis are now enjoying the benefits, while those countries which avoided them and relied on tax hikes to consolidate public finances are falling behind”.
As Draghi made his announcement – shaving all main interest rates by 10 basis points – financial journalists tweeted their opinions, with the consensus being this may all be “too little too late”.
Quoted in the Daily Telegraph, one explained: “While any macroeconomic strategy such as this interest rate move is welcomed, the issues around the inherent economic imbalances in the eurozone are now causing even the German and Dutch economies to falter.
“More fundamental steps to create entrepreneurism and encourage inward investment into the eurozone must be considered.
“While interest rates are an important tool, the ECB has little flexibility left so it is doubtful this change will have any dramatic effect on recovery in the eurozone.”
Every cloud has a silver lining
Meantime, the troika’s men in suits are due back in Portugal next week for the first evaluation since the country exited the adjustment programme.
These regular six-monthly checks will continue until Portugal has succeeded in paying back 75% of the 78-billion euro bailout.
On the subject of paying back the bailout, economist Daniel Bessa suggests one item up for discussion next week could well be Portugal paying back its loan ahead of time.
Draghi’s latest round of cuts to interest rates could make this suddenly possible.
Writing in Diário de Notícias, Bessa explains: “Portugal could seek money on the markets at lower rates of interest than those that they are paying the Eurogroup”.
But there is a catch, he warns. “It would be cheaper, but the deadlines to pay back would be shorter”.