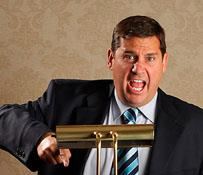 PARTY POLITICIANS normally disagree with each other on many things, whether in national Parliaments or in Brussels. But on one issue, all generally agree that any form of discrimination, whether on grounds of race, religious belief, age or sexual orientation, should be condemned and rooted out in whatever way possible. Indeed by working together on such issues, much progress has been made by politicians over the years.

But sadly such consensus is changing. Many countries are approaching their election seasons, and positions are being taken by one party to try and wrong-foot another. Politics is taking over from progress.

Recently in the European Parliament there was a report by a UK MEP from one particular party on ‘progress made in equal opportunities and non-discrimination in the EU’. The reality is that attempts to legislate in this sensitive area have not brought universal success. There have been immense difficulties in crafting workable legislation, and indeed some dozen EU Member States have found it difficult to implement existing Directives. The comment expected from the report was an analysis of the limitations of current laws, and clear proposals to design out any difficulties. Instead we got a proposal for yet more EU legislation.

Some of us felt this was exactly the wrong approach, and had the honesty and the guts to say so. So did a German Liberal Democrat speaking in the debate, a self-professed homosexual, who rounded on the report’s author to say that not only would new EU legislation do nothing to help the sort of discrimination he faced regularly, but that it was likely to make matters worse. He, we and several hundred others, voted against the report.

I had taken the precaution of checking in advance some likely reaction back home. I had been in touch with a number of different organisations, all of which cared about discrimination issues but none of which saw more one-size-fits-all EU law as the right response. I asked for comments on my own amendments – to get the robust reaction that the report was not worth amending in any way as its proposals were unwanted and unnecessary.

Nonetheless in the Parliament our vote was caricatured by other political parties as proof that we were closet racists, sexists or ageists. Damning press releases were sprayed in all directions. Constructive work on the real issue was set aside in favour of party-political posturing, with different parties each saying they were the only one that really cared.

More EU laws are not the solution to every problem. To be attacked by other politicians for telling this obvious truth is what I call real discrimination – but no new EU law would stop this either.