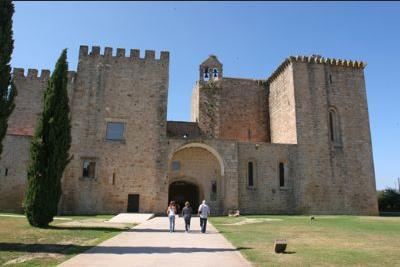 ‘Travel’ is written by freelance journalist and photographer, Chris Graeme, who lives in Lisbon and   enjoys subjects such as world economics and politics.

The quiet, sleepy pace of life, warm hospitality and varied gastronomy of Portugal’s Upper Alentejo region make this the perfect place to getaway from the hustle and bustle of Lisbon, Porto and the hoards of tourists in the Algarve.

This region of medieval fortified towns with immaculately kept whitewashed cottages whose doors are surrounded by flowers is steeped in centuries of tradition, culture and history.

We based ourselves in the picturesque and restful town of Castelo de Vide, where we stayed at the comfortable and reasonably priced (30 euros per person) three-star Hotel Sol e Serra Golf, which is in the town centre and acts as an excellent base from which to travel out and explore the stunning surrounding countryside.

This pretty community is of Roman origin and nearby you can visit the ruins of the Roman settlement of Mírobriga and see the well preserved Roman Bridge. However, it is the little Jewish quarter with its winding cobbled streets dating from the Middle Ages that the town is famous for. There is still much of the Medieval Jewish atmosphere with Portugal’s oldest synagogue and, of course, the impressive 14th century castle and pretty six-column white marble Renaissance fountain.

Take a short drive up to the chapel on the hill overlooking the town for breathtaking 360 degree views of the surrounding countryside and be sure to sample the delicious and rich game fare at Mil Homens and O Sever restaurants, here deer, partridge, lamb casserole, wild boar and slices of succulent pork neck in salt and garlic, and rich tomato soup with bread and egg are all firm favourites.

From there we travelled a stone throw away to one of Portugal’s best kept secrets – the medieval hilltop fortress of Marvão from which wonderful views of the unspoilt Serra de São Mamede are to be had.

This gothic medieval city had a strategic position against the Moors and Spanish in the reigns of Dom Afonso Henriques (1112-1185) and Dom Sancho II (1223-1248), and because of its garrison status it was given the Carta de Foral in 1226 which meant that the local populace didn’t have to pay taxes and some still don’t!

A candidate for the World Heritage list, it has some marvellous terrace bars from which to enjoy a cooling drink, an interesting 13th century church, local museum with archaeological finds, pottery centre and a charming pousada inn.

Nearby Alter do Chão is a small medieval gothic town with a recently restored castle and arts centre built by Dom Pedro I in 1359, which belongs to the royal House of Braganza and is worth a visit on the way to admire the local horses at the nearby Correaria, before enjoying afternoon tea at the wonderfully restored pousada and medieval castle monastery at Crato where, in the early summer, you’ll see the swifts and their nests of chicks under nearly every nook and cranny.

Portalegre is the busy regional capital of the Upper Alentejo but is something of a disappointment in terms of history and monuments, although it does boast an impressively restored 13th century castle and arts centre which has a terrace restaurant and café. Founded in the 12th century and fortified by Dom Afonso III in 1259, its castle dating from 1290 has 12 towers and seven gates.

Today the town is worth visiting for its charming narrow winding shopping district and the famous Guy Fino Tapestry Museum which has reproductions of works of art by many famous Portuguese artists and has helped keep this ancient carpet weaving tradition alive.

Far more interesting and picturesque is Estremoz which is the largest of the Alentejo’s ‘Marble Towns’, and the upper part has one of Portugal’s best restored pousadas or inns dating from 1258 and was once a residence of King Dom Dinis and his wife Queen ‘Saint’ Isabel of the Miracle of the Roses. According to legend – which must be taken with a pinch of salt since the same legend exists in several other European countries – the King disapproved of her giving alms and bread to the poor because of the risk of plague and leprosy? However she continued to do so in secret and hid the bread in the folds of her dress. When the king and his spies caught her in the act, she opened the fold of her dress and the bread had miraculously turned into roses! Be sure to have dinner in the ‘São Rosas’ restaurant which offers up delicious local cuisine and egg based sweets known as Doçaria Conventual since the recipes are hundreds of years old and were devised by the local nuns and priests in the region’s convents.

Lastly, don’t forget to visit the tiny fairytale walled village of Monsaraz which retains a wonderful medieval atmosphere. It was originally fortified by the Knights Templar and today its 150 or so residents live in immaculately kept charming white houses dating from the 16th century with outdoor staircases and wrought-iron balustrades and balconies.