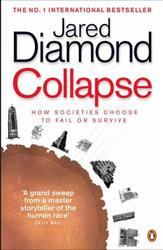 WE ARE featuring two very different books this week, one popular non-fiction and one fiction. Both are showing signs of being popular sellers.

Diamond, a professor of Geography and Environmental Health Sciences at University of California, Los Angeles (UCLA), wrote the acclaimed bestseller Guns, Germs and Steel, which won the Pulitzer Prize in 1998. That strove to answer the question why it was Europeans and their descendants who ruled the world in the last 500 years instead of some other human society. The new book is subtitled How societies choose to fail or survive and this is a revealing investigation into the fate of past human societies, what determines environmental success and why cultures collapse.

Diamond examines phenomena as diverse as the preserved fecal matter of American packrats, the hunting practices of the Inuit, the lumber industry in 17th century Japan and cannibalism in New Guinea, in the course of an enquiry into the reasons why, from time to time, some societies fall apart or simply vanish (a far more frequent occurrence than you might realise).   A key example is Easter Island in the Pacific. The first European explorers to arrive on the island were baffled by how an undernourished people, scraping a living on a treeless, infertile rock, could have erected those giant stone heads. Erich von Daniken thought the answer must be spacemen. A more likely answer was that when Easter was first settled, it had plenty of timber, including the world’s tallest palms, and soil fertile enough to support a population of up to 15,000. However, over the centuries, population growth and some poor collective decisions led to deforestation, erosion and a slow eating-away of natural resources. Though the variables change, the underlying problems in every case he examines remain the same: too much strain being placed on limited resources.

Diamond argues that similar environmental constraints underlie many problems of the modern world. In one of the most disturbing chapters, he shows how shortages of farmland and declining agricultural productivity preceded the 1994 genocide in Rwanda.

But ecological catastrophe is not confined to the third world: it looms in overgrazed, increasingly drought-stricken Australia and in the outwardly pristine wildernesses of Montana. Collapse is far from an environmental jeremiad. Diamond is at pains to make it clear that people negotiate with their environments: environments set constraints, but we decide how to behave.

Reading his book, it is impossible not to feel how fragile our hold on the earth is, and how closely connected all our lives are. Diamond’s message shouldn’t be ignored. Collapse is remarkable for the clarity of its argument, a quite immense breadth of learning and, importantly, sheer readability.

In paperback at 14 euros.