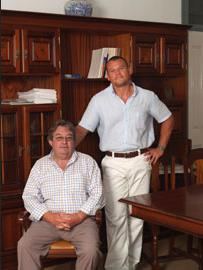 The awards, organised by International Homes, sponsored by Bentley and in association with the Daily Mail, are now entering their 13th year and are considered the Oscars of the property industry.

The awards are open to all companies working in the residential property industry around the world.

The judging committee was chaired by Eric Pickles MP, who is joined each year by a selection of property journalists, architects, interior designers, sponsors and professional associations to judge the contest.

The family firm John D Griffiths was invited to enter the annual contest earlier this year and put six weeks of work into the application process.

The company has been established for more than 30 years, specialising in Lagos property and covering a wide range of new and re-sale residential properties including luxury beach villas and apartments at Porto de Mós.

John Griffiths told The Resident: “It was a busy process, but we all enjoyed it and I am delighted that our customers can now have even more confidence in the quality of our property as the awards are so highly regarded in the industry.”

It is a remarkable feat for the relatively small company with two separate administration and sales offices in Lagos to house nine members of staff. Succeeding in fighting off competition from the major developers throughout the country is something they are extremely proud of, proving that in the property industry quality can triumph over quantity.

He said :”We’re all extremely proud at the Vigia Group – it just goes to show that our brand, renowned for quality and success continues to be recognised. We will shortly be announcing some major new development opportunities, which will make us not only the leading resort developers in Portugal but also in Europe.”

This badge of merit from an independent organisation is highly sought after by businesses in the industry. By attaining one of these five star awards it means the company immediately stands out as an exclusive entity to clients and fellow professionals on a global scale.