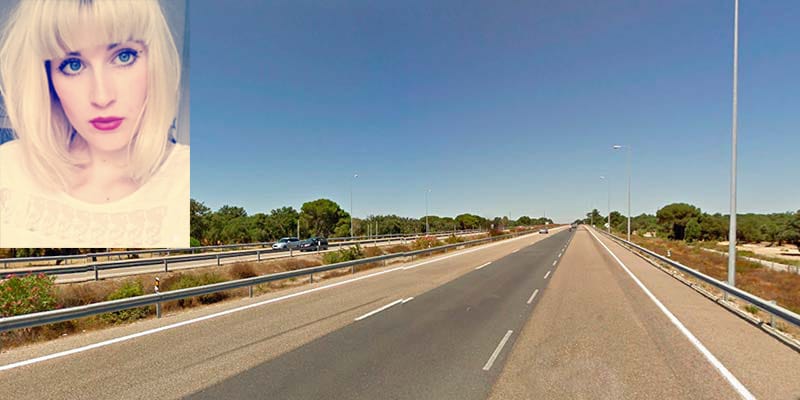 A devastated family whose loved-one died in a bizarre accident on the A2 motorway near Silves earlier this year has appealed for further information.

The grandparents of 22-year-old Vivi Zachmann – run-over by a car after apparently running along the motorway after dark – do not believe they have been given the full story.

Media reports at the time suggested Vivi had been drinking with two other men (click here).

The trio were apparently in a car, travelling north, which pulled over to the side of the road for the driver to urinate.

The suggestion is that Vivi then got involved in a discussion that led her to leave the car and run down the tarmac “erratically”, causing a car to fatally hit her.

But in the absence of a toxicology report – or even official police report – the family are stumped.

Explains grandmother Dee Berbank, British by nationality: “For six weeks we have tried calling/writing to every consulate, (German/ British/ American/ Portuguese). We have written to the German Foreign Office, mayors, German/ Portuguese police authorities, etc to try and find out what the official investigation revealed.

“To date, we have nothing. No one is interested in giving us any information.

“We are devastated to think that our girl was just another number, a statistic, a nothing.

“We cannot understand that as family members no one will give us the time of day or any explanation”.

Dee Berbank described her granddaughters as a “first class student at a German University, studying Chinese” who had just returned from China after receiving a full scholarship to study there”.

The idea that she could have become so drunk as to end up on foot on a motorway simply does not gel with the family’s knowledge of their “beautiful, caring, intelligent” loved-one.

“As a sensible, organized and pragmatic young woman, we feel this is not something she would logically do. It all makes no sense to us”, said Vivi’s grandmother.

The family – especially Vivi’s heartbroken single-parent father – want ‘answers’, at the very least clarity. They have supplied The Resident with a photograph of Vivi in the hope that someone in the Algarve may have some information that fills in all the blanks.

For instance, the family understand Vivi, her boyfriend Kai and his friend Thomas ate at a restaurant before the tragedy (early evening on April 1) but Kai has assured them there was no ‘drinking to excess’ or anything that involved them becoming inebriated, as Correio da Manhã originally reported.

At this point, “we have no idea if she was intoxicated or if she was trying to escape a bad situation”, said Dee Berbank.

A call to the accident department of Albufeira GNR elicited limited information.

Vivi was already dead by the time agents and emergency response got to the scene, so it was impossible to say exactly what caused her to be in the middle of the motorway, said a source.

“We cannot help with the toxicology results, as these will be held by the Tribunal of Albufeira”, said a spokesman, putting us through to the agent who had apparently been one of the first on the scene on that tragic night.

The agent confirmed that Vivi was found “in the middle of the highway” and that “the whole situation was very complicated”.

“There were no witnesses”, he explained. “All we had to go on were the accounts of the boyfriend who we found further up the motorway, and the driver.

“The driver that hit the young woman was not even aware he had hit a human being until after he stopped his car”.

The agent agreed “it is very easy to understand that the family is upset and thinking that maybe there is more to this than we know. Maybe there is…”

He did give pointers as to how to expedite the autopsy report – which will include details that should show whether Vivi was under the influence of any substances.

Thus for now this desperately sad mystery remains ‘unclarified’ – and the family will continue pressing for answers.

Said Vivi’s grandmother: “It took thirty days before we could receive our child to bury her. We were unable to view her or give her a kiss. If there is anyone out there who has any kind of information that we are not yet aware of, we would dearly love to hear from them”.