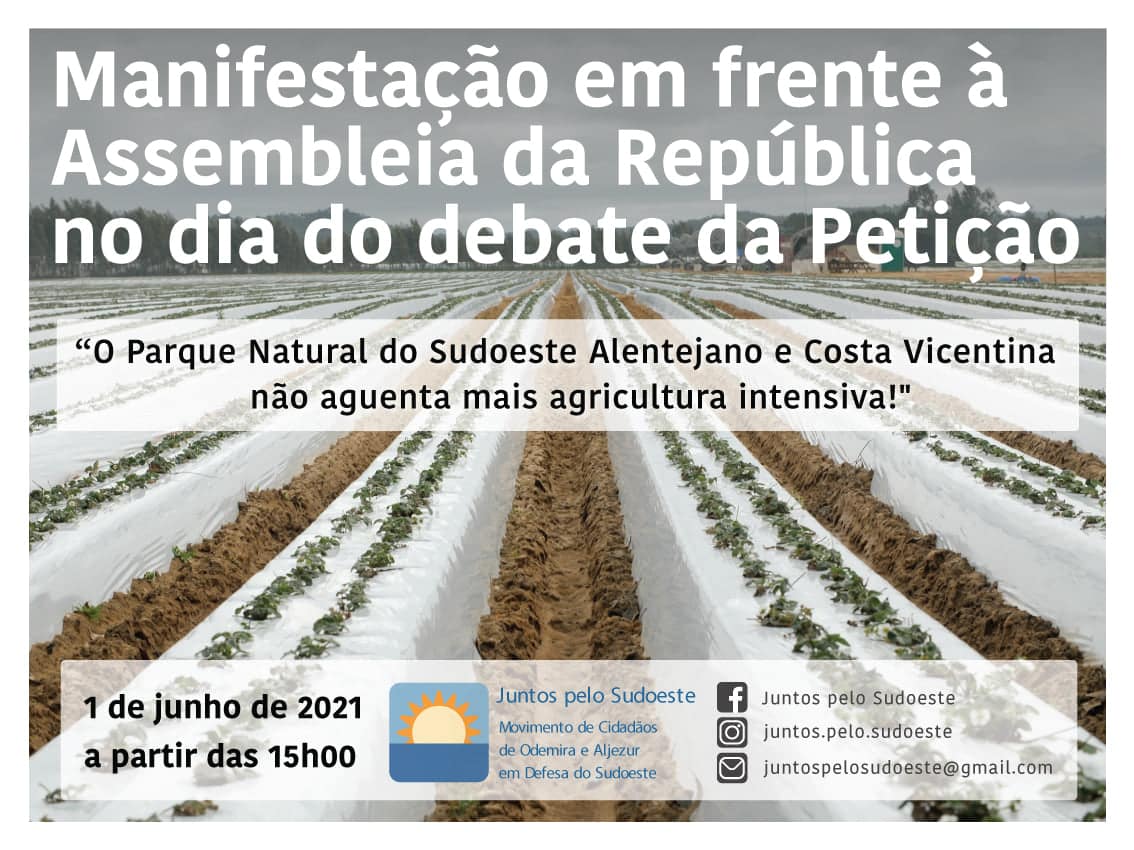 Pressure on Portugal’s Socialist government to call a halt to the devastating spread of plastic greenhouses along the Costa Vicentina coastline increased exponentially today.

In the wake of the furore of immigrants ‘caught out’ by the pandemic (click here), environmentalists have seized the moment to ram home the message: this ‘cannot go on’: the policy of ‘turning a blind eye’ and ‘letting companies go on draining water supplies and poisoning the soil with chemicals’ will turn the Odemira corner of the southwest coast into a dust bowl.

To this end, civic group Juntos Pelo Sudoeste has already addressed a swingeing complaint to the European Commission (click here). But today – as the group staged a demonstration outside parliament – LPN (the League for the Protection of Nature), one of the country’s most established conservation NGOs, has also denounced what it terms the “total destruction of the southwest coast”.

It’s hoped that this ‘double whammy’ exposing “irresponsible intensive agriculture that is advancing incessantly in the middle of a Protected Area” will at last force some changes.

Reinforcing the urgency of the situation, local rural tourism host Frank McClintock has been posting ‘terrifying’ videos over social media on the dwindling capacity of Santa Clara dam – the reservoir that has been supplying the greenhouses with the water they need (click here).

The dam has been at what Juntos Pelo Sudoeste calls ‘dead level’ (the point where it should not be used for agriculture) for the last two years. Yet the draining of this precious resource continues relentlessly.

LPN’s contribution to this scandal is to show the Commission that ‘natural ponds’ that have been classified as priority habitats for various species – and which have received European finance for the last five years – have been railroaded by proliferating greenhouses, and are now gone for good.

Says the NGO, “the origin of this disaster perfectly illustrates the progressive degradation of the southwest coast which holds extraordinary natural treasures that don’t exist anywhere else in the world”.

By coincidence, Expresso writes that decisions will be made in Brussels this week on “how to spend millions in taxpayers money on agriculture for the next seven years”. Portugal’s master plan remains “beholden to unsustainable industrial agriculture” which will “cause more environmental destruction and continue to benefit a small group of landowners, many linked to agro-industry” the paper heard – not just from environmentalists, but from specialists contracted by the government to advise on the best policies with which to move forwards.

Says Expresso, five of these specialists have now resigned from the group of 16 brought in “for feeling their opinions were leading nowhere”.

One, Mário Carvalho, has said he is staying because he “still has hope to be able to influence something…”