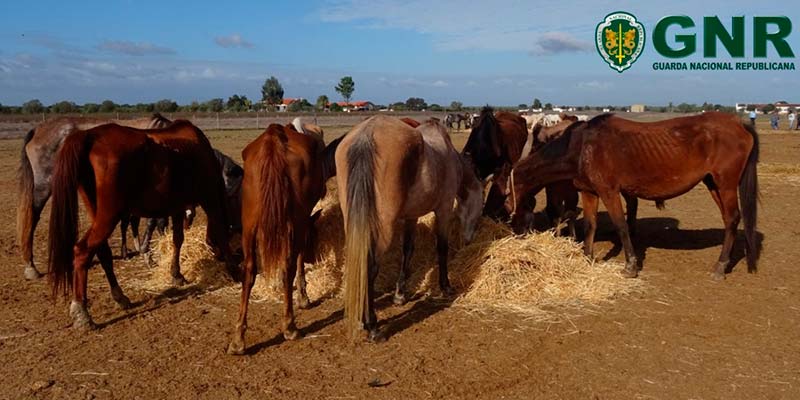 Animal rights campaigners have been left in despair over an ongoing ‘holocaust’ on a farm in Ferreira do Alentejo where more than 100 horses were ‘apprehended’ at the beginning of the month, but left in the ‘care’ of the man under whose watch they were literally starving to death and deprived even of water.

So far, fourteen horses have died, and fears are that more will follow.

Only on Monday did the situation ‘move forwards’ in any kind of positive way.

IRA – the non-profit animal intervention and rescue mission – finally travelled to the farm, and with the help of GNR police organised for the burial of carcasses that had lain in parched fields for days.

Concern now is for the remaining animals, many of which are sick and weak.

Say reports, the ‘owner’ of the horses has been given seven days to come up with a solution – or face prosecution.

IRA meantime has supplied bales of hay and refilled all the water troughs and deposits on the three hectare property.

In a statement on their Facebook page, IRA claims the number of animals found on the farm doesn’t correspond to the number apprehended at the beginning of the month – suggesting the owner has already moved some of the horses, or even sold them, which would leave him liable to the crime of disobedience.

Whatever the case, the owner appears not to be helping matters by suggesting the horses’ poor conditions could be down to having been poisoned.

Indeed Jornal de Notícias labelled him ‘sarcastic’, quoting him telling reporters: “I don’t know what’s wrong with the animals. They don’t talk to me…”

IRA’s vet is understood to have found no evidence of poisoning.

The local municipality has ‘refused to comment’ on the situation, leading animal lovers to bewail over social media the state of a developed country moving so incredibly slowly when it comes to such a clear case of animal neglect.

Said one hours before IRA personnel appeared on the ground: “How the hell is this possible? A week ago the GNR got involved, and one week later horses are still there and dying? What is wrong in this country?”

It seems more than likely now that the horses that can survive will survive. The initial ‘apprehension’ made on November 8 flagged 104 animals at the farm in Abegoaria and the potential infraction by the owner of ‘failure to register them’, which could lead to fines of up to 3,750 euros.

The supposed owner, however, describes himself as a sick man without a job. Indeed, this is his reason for failure to adequately feed the horses. As to why he amassed so many, reports say he has no answer.