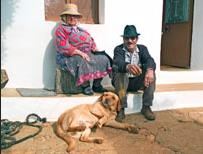 PORTUGAL REGISTERED more deaths than births in 2007 according to the Portuguese National Statistics Institute.

According to records stretching back to 1900 for births and deaths, the Portuguese natural population, not taking into account emigration or immigration, had grown until last year when it fell for the first time.

Global figures for the Portuguese population are presented every five years and published in the Statistics Bulletin.

Mário Leston Bandeira, the President of the National Association for Portuguese Demography, said: “It’s plain to see that we’re entering a phase of what is known as negative natural growth or put another way there are more deaths than births.”

He added that Portugal was following a pattern that was happening in other European countries. One of the reasons was that sexual equality, contraception and women going out to work and having careers meant that families were getting smaller.

On the other hand, the post-war baby boom generation of the 1950s and 1960s was approaching retirement age.

Rui Vaz Osório for the National Commission of Premature Births said: “We’re hitting rock bottom in terms of the birth rate, and it’s hard to imagine that the birth rate could fall any further than this. We’re already demographically unbalanced.”