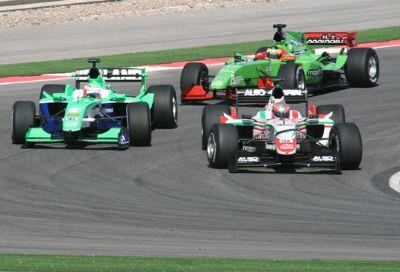 High winds, a poor spectator turn out and the usual parking delays were not able to detract from the undeniably exciting debut feature and sprint A1GP races held on Sunday at the Algarve Motor Park.

The Swiss car and team ran like clockwork during the feature race managing to hold off stiff competition from local hero Filipe Albuquerque of Team A1GP Portugal and the strongly supported Irish car, to take first place on the podium.

Drivers, team members and spectators were all able to enjoy the challenging and demanding track that allowed for side by side racing, real overtaking opportunities and constant position challenges.  The difficulty of the track was demonstrated with only 10 of the 20 starting vehicles making it to the end of the 42 laps.

Although the Irish took second place on the day, a controversial penalty was given to the team for their illegal overtaking of the Australian car during a restart; this dropped them into fifth position and boosted the Portuguese team into second in the race.

Mark Gallagher of Team Ireland said of the penalty: “We had no choice but to overtake Team Australia as the car had problems. This is deeply frustrating for us and it is a shame that a terrific race has been ruined by drive throughs.”

Team New Zealand in the Black Beauty and Team Netherlands were both fancied to perform well on the day, however the Dutch car, although in pole for the feature race, was unable to even start the main event after an electrical fire on the warm up lap forced the driver, Robert Doornbos, to retire.

Meanwhile, the Team New Zealand car driven by Earl Bamber was involved in a collision with 27 laps to go after the ambitious driver pushed the South African car a little too hard resulting in both crashing out of the race.

“You can count on the Kiwis to choke,” lamented a member of the New Zealand team.