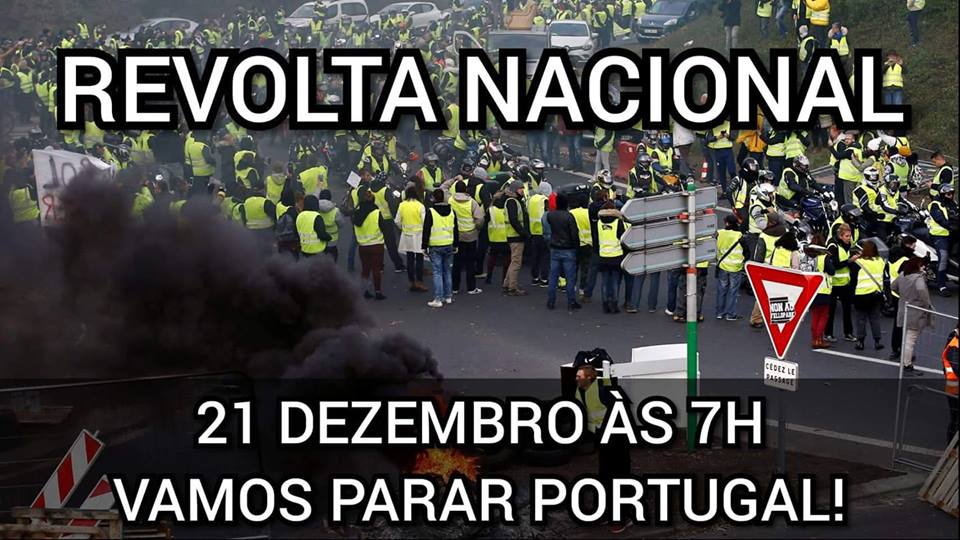 It’s being billed as ‘the arrival of France’s yellow vest protests to Portugal’.

Whipped up over social media, the authorities are reportedly ‘aware’.

So far over 13,000 people have confirmed their physical support to the cause which organisers describe as ‘wanting purchasing power, lower taxes, lower fuel prices and IVA at 17%’.

Inspired by the yellow vest protest, this one has a Portuguese twist. It advises “civism”, which suggests Lisbon won’t be turned into the battleground of the Champs Elysée.

The group’s motto nonetheless is: “We want to stop Portugal”.

To that end, the ‘objective’ is to “paralyse the A8” motorway. Thanks to the huge ‘following’ the main Facebook page has received, other protests are expected elsewhere – including the Algarve.

Writes Jornal de Notícias, there will be a ‘buzinão’ (honking car parade) on Lisbon’s 25 de Abril bridge leading to Marquês do Pombal, demonstrations in Porto, protests in front of Beja town hall, and some kind of ‘event’ at Fórum shopping centre in Faro.

Spin-off WhatsApp chat has led to the formation of other social media groups – to the extent that until next Friday actually arrives, the likely impact of this initiative will be difficult to quantify.

A source for the PSP has said that the force is “accompanying the situation” and “will direct units to guarantee efficient response is all situations that may arise” . But there are those who believe the whole thing could end like a damp squib.

Minho university’s Francisco Conrado, for example – a “specialist in social media networks” – has told JN: “It is very easy to create indignation online. The act of revolt, or participation in some form of movement or protest, all takes place at the distance of a click…”

But he doesn’t believe for a moment that Portugal’s Day of Revolt will come close to France’s yellow vest protests.

“We are talking of a completely different economic and political context” and a movement that in his opinion is “without great unity”.