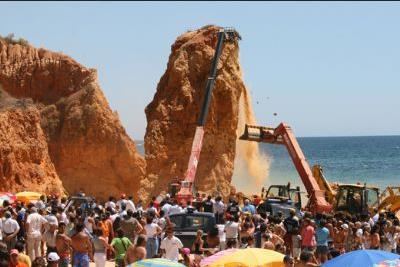 With shockwaves still being felt across Portugal following the fatal rock fall at a beach in Albufeira on August 21, it has come to light this week that several cliffs overlooking Algarve beaches are at risk of collapsing and no warning signs are in place to alert bathers to the potential dangers they represent.

Also this week, Albufeira’s public prosecutor opened a criminal inquiry into the incident at Maria Luísa beach that killed five holidaymakers from the north of Portugal and saw three others injured.

Authorities responsible for monitoring the Algarve’s coastline say the “unforeseeable accident” was not a result of negligence.

Valentina Calixto of the Regional Hydrographic Administration (ARH), the entity responsible for assessing coastline stability, told the Algarve Resident: “We monitor the coastline regularly and assess which areas are considered critical and at imminent risk of collapsing.

“The Maria Luísa beach, although identified in 2000 as being of potential risk, was not considered critical.”

She said that warning signs are always placed on beaches that are considered dangerous to alert bathers.

However, many end up being destroyed due to vandalism.

Captain Marques Nunes of the Portimão maritime police, who coordinated the rescue operation at Maria Luísa beach, said that the warning sign on the rock that collapsed clearly read ‘Dangerous zone’ in four languages, and that the measures taken to alert bathers were considered sufficient.

He also confirmed that Albufeira’s public prosecutor had already received the official report relating to the occurrence, including names of witnesses, and it will now conduct an inquiry into the case.

Orlando Borges, president of the Instituto da Água, the water institute, said erosion is responsible for the majority of cliff collapses and, in the Maria Luísa case, no one could have foreseen what happened.

“These incidents often happen in the winter, but there is always some risk at any other time of the year,” he said, ruling out that urban development had anything to do with the accident.

However, environmental association Almargem said that urban development along the Algarve’s coastline was partly responsible for the fragility of the cliffs.

A spokesman told the Algarve Resident that pressure from developers to build on cliff tops has meant that several areas of the coastline, mainly in Albufeira, Portimão, Lagoa and Lagos, now overoccupied, are at risk.

The type of rock that exists along the majority of Algarve’s coastline is sandy and porous, meaning it is less compact and, therefore, more fragile.

Meanwhile, the government announced on Sunday that fining bathers who disrespect warning signs at beaches could soon become a reality.

Environment Minister Nuno Correia announced this intention on the same day that bulldozers demolished the top part of the rock that remained standing on Maria Luísa beach to make it safer.

“Changes to the law are a possibility so that those who disrespect warning signs on beaches can be fined,” said Nuno Correia.

The Algarve Resident was on the beach last weekend and spoke to several bathers about beach safety.

Maria Domitília, an Algarve resident who frequents Caneiros beach in Ferragudo, Lagoa, said she was amazed that on Saturday, the day after the tragic accident at Maria Luísa beach, she saw a family lying in the shade of a cave that had been formed under a cliff eroded away by the sea.

“I see children with their buckets and spades picking shells right under the cliffs,” she said. “What’s even more worrying is that often you can see cracks on the rocks above.”

Safety work was carried out at Praia da Oura in Albufeira on Tuesday night as part of the Regional Hydrographic Administration’s (ARH) programme to monitor the Algarve’s coastline this week.

Two large rocks on a cliff face in Praia da Oura were deemed to pose a risk to public safety, which led the ARH to proceed with demolition work.

Environmental association Almargem had already listed the cliff face as potentially dangerous to bathers but, according to reports in Observatório do Algarve online, the ARH had not considered it to be a risk.