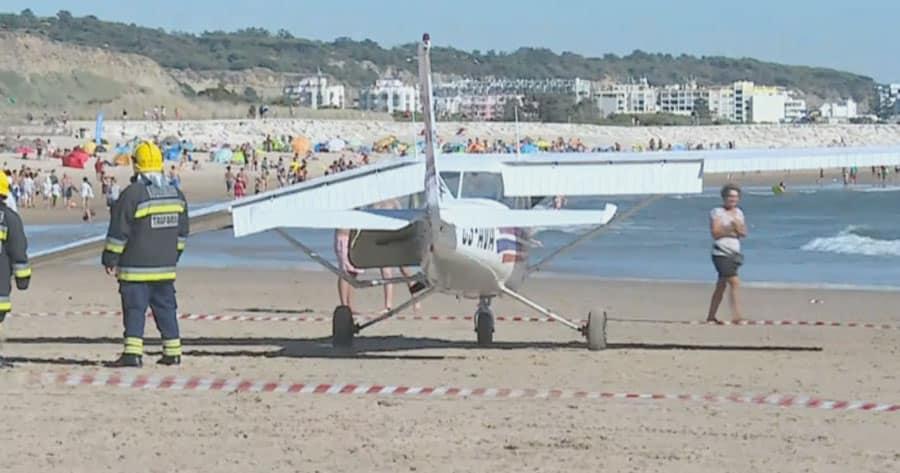 A damning report by aircraft accident investigators has shone an uncomfortable spotlight on Portugal’s flying schools – putting question marks over maintenance practice and procedures, citing the high turnover of flight instructors and describing a “worrying number of incidents” in training flights “either involving instructors in the exercise of their duties” or resulting from their “direct contribution”.

The GPIAAF report (conducted by the office for the prevention and investigation of air and rail accidents) was launched specifically to investigate the emergency landing that killed an eight-year-old girl and a 56-year-old man on a packed beach on the Costa da Caparica in August 2, 2017 (click here).

At the time, many people on the beach were outraged by the pilot’s decision to come down on the crowded sands, potentially putting so many lives at risk.

The father of the dead child told reporters that everything pointed to the pilot “thinking of saving his own skin, rather than the safety of others”.

Carlos Conde de Almeida refuted the claims, saying he had acted totally by the book.

Some reports have suggested he even said he had “no regrets” and felt he was being treated unfairly by the media, as well as by police who cited him for negligent homicide.

16 months on, GPIAAF investigators would appear to disagree.

Their report has concluded that 67-year-old Conde da Almeida was not acting by the book. In fact he “did not properly manage the emergency” at all – spending far too long trying to fix the engine failure that had crippled the Cessna 152 fixed-wing plane, to the extent that he ignored the very basics of pilot training: “aviate, navigate and communicate”.

GPIAAF’s report, released this week, may or may not lead to Conde de Almeida being formally charged for negligent homicide. But it went beyond the horror of Costa da Caparica – where two women also received light injuries as they ran from the plane’s landing path – and described “a significant increase in incidents involving training flights”.

Detailing procedures that were not followed in this incident, the report stressed that training for ‘ditching’ (the term for crash-landing into water) was also not evident – even though flight instructors should be “regularly trained” so that they feel competent enough to go through with it, if necessary.

The “approved training organisation did not demonstrate adequate follow-up or convenient standardisation of instruction, leaving many aspects and standard procedures at the discretion of the instructors”, said investigators.

Conde de Almeida’s employers, GAir at Cascais, at the time of the accident “suffered from a discontinuity and lack of follow-up of the support structure that was at the basis of its approved training centre certification”, they continued, while the school’s statistics showed a “significant increase in operations associated with a decrease in the number of flight instructors, with a serious turnover ratio”.

Bearing all this in mind, checks only once a year by the civil aviation authority were “probably insufficient”.

GPIAAF stressed at the beginning of its report that the only aim of the investigation was to “collect lessons which may help to prevent future accidents”.

Use of the report “for other purposes may lead to incorrect conclusions”, investigators added.

Thus covered, the report made various recommendations – including two involving how flight school should operate.

The first was that the particular school involved (now rebranded L3, Commercial Aviation) should “revise its operational checklists” to ensure they follow all the sequences detailed by aircraft manufacturers.

The second was that the ANAC reassessed its standard extended operating procedures “and extended this reassessment to other authorised training organisations”.

ANAC for its part refused, mainly on the basis that in its opinion these procedures should be left to the schools in question.

GPIAAF stuck to its guns, sending out another recommendation that the ANAC “carry out evaluation of the current flight instructor standardisation process at approved training organisations, proposing and implementing improvements in instructor pilots performance”.

The ANAC rejected this recommendation as well, saying the responsibility was the “exclusive competence” of the approved training centres.

And here came the ‘final punchline’: An analysis of recent occurrences on national territory has revealed “a significant increase in incidents involving training flights” with a “worrying number showing contribution or direct involvement of instructors in the exercise of their duties”.

“Bearing in mind the high turnover of instructors at approved training centres in Portugal with their increase in activity, the investigation considers its safety recommendation remains relevant and necessary”.

Whether the GPIAAF report does herald any changes at flying schools remains to be seen.

But the decision to land on that packed beach on the Costa da Caparica in the middle an August afternoon seems as wrong now as it appeared at the time.

As to the cause of the Cessna’s engine malfunction, this looks like having resulted from “improper fuel delivery to the cylinders from the carburettor, due to a defective fuel valve”.

A similar defective valve has been identified in three other ‘incidents’ in Portugal, leading GPIAAF to send its findings and information to the manufacturer in question, and the European Aviation Safety Agency.