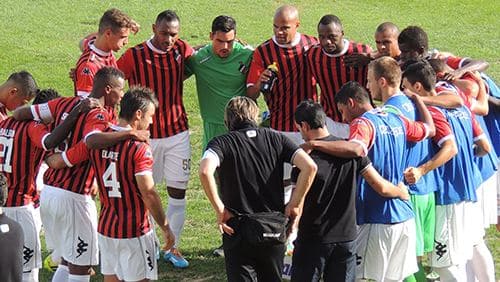 On Sunday Olhanense entertain Portimonense in what is seen as a defining game for the Olhão based outfit. With only one point garnered from the last four league games, plus elimination from the Portugal Cup, these are critical days for the troubled club who are just two points off the relegation zone.
Whilst the defence stood solid in the midweek 0-0 draw at home to Beira-Mar, it was the attack that failed to produce the goods. Semedo was handed the captaincy as Celestino and Ubay Luzardo were suspended by the club for disciplinary reasons following an altercation after the cup defeat by Oriental.
Despite several passages of intricate football, Olhanense were unable to find the back of the net. Four days later away at V.Guimarães ‘B’ and the reverse was in evidence as goals from Paulo Regula and Bazzoffia twice gave Olhanense the lead. But an own goal by Nuno Diogo and a mistake by keeper Tiago Maia handed a 3-2 victory to the home side.
Substitute Mastriani’s glaring miss with fifteen minutes remaining summed up Olhanense’s week. It is crucial that new manager Jorge Paixão reverses the trend. The fans are not happy and who can blame them as the team spiral towards the bottom of the league.
Paixão has called on all true fans of the club to turn out in force and get behind the team as they do battle with a Portimonense team that will be in confident mood after a 2-2 draw with a strong Benfica ‘B’ team.
Likewise, the team must show more passion and commitment if they hope to attract back the missing fans. Kick-off on Sunday against Portimonense at the José Arcanjo Stadium, Olhão, (behind McDonalds on the EN125) is 3pm.
Photo: Olhanense players before the game with Beira-Mar
By CHRIS WRIGHT