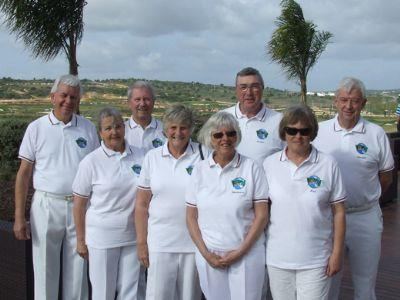 Bowlers from across the Algarve visited the new crown and flat bowling greens at the Amendoeira Bowls Club, near Silves, on Tuesday, February 10.

A tour of the facilities led by club manager Peter Cain allowed members and prospective players a chance to assess the changing rooms, bar and restaurant, terraces and of course the two greens located next to the club house.

Michelle Collins from Oceânico told the Algarve Resident: “We have two amazing greens here at Amendoeira, a flat and a crown green.  The crown green is the first of its kind in Iberia and we are hoping to attract both residents and touring parties to play here.”

Work is still in progress around the greens with safety barriers, seating and tables and a small club hut still to be completed before the official inauguration week between March 16 and 20.

“We want to be able to provide a distinct area for the bowlers separate to the golf here and the club hut that is to be built will be where the members can post information, league tables and keep equipment, independent from the golfers,” said Michelle.

Peter Cain, the Bowls club manager at Amendoeira, believes that the new club will help increase the number of players in the region and will become part of summer and winter leagues in the near future. “Players of all levels are invited to join the club.

There will be roll ups on the flat on Tuesdays, Fridays and Sundays and for the crown green on Mondays and Thursdays.  Experienced players can practice while novices will be able to take lessons to improve their game,” he said.

Members of the ladies and men’s Portuguese national bowls team were present at the coffee morning and helped with the tours of the facilities.

The two teams, made up of players from across the Algarve, will both be travelling to South Africa in May for Atlantic qualifiers for the Bowls World Cup 2012 to be held in Adelaide, Australia.

Oceânico will be sponsoring the team for the World Cup and will be providing the members with specially made tracksuits and bags for the occasion while Amadeus Gil de Rocha, President of Bowls Algarve, will also be offering the team support. The crown and flat green will be open to members from March 1 with the first major event being the inauguration tournament between March 16 and 20.

For further information about the Amendoeira Bowls Club please contact Peter Cain by either calling 961 356 804 or email peter.cain@oceanicogroup.com