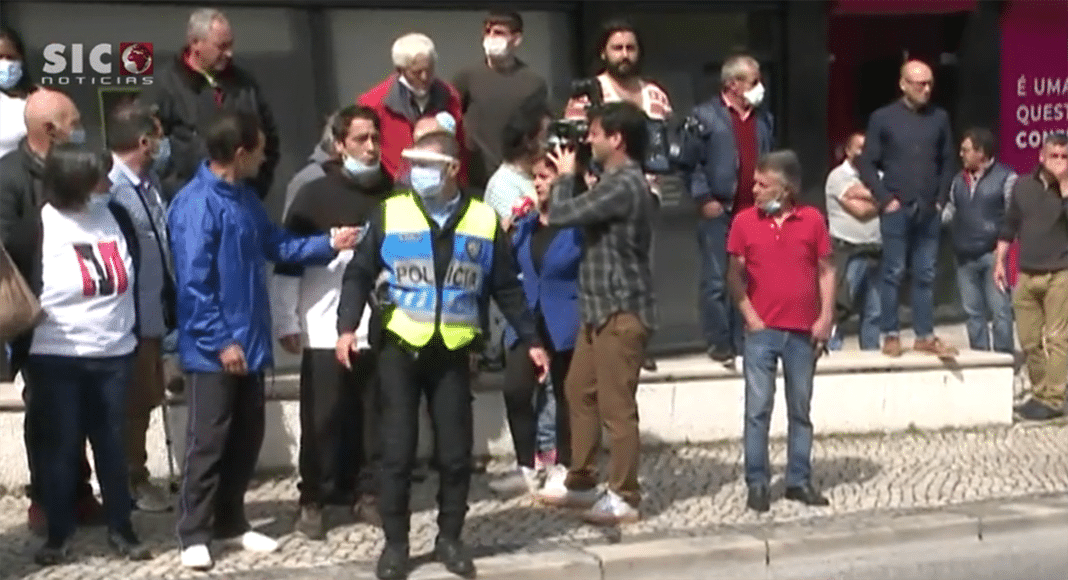 As many as 50 people turned up outside Leiria court today to heckle the father and stepmother of tragic Valentina Fonseca as they were led inside for judicial questioning.

The couple who told police the little girl had ‘disappeared’ – sparking pointless days of searches – are now heavily implicated in an horrific case of murder and deceit.

According to stories in the press, far from nine-year-old Valentina being killed in a moment of uncontrolled aggression, it appears she may have suffered for 13 terrible hours, wrapped in a blanket and left on the sofa.

Says Correio da Manhã, 32-year-old Sandro Bernardo and his older partner Marcia, 38, “had hours in which they could have saved the child”.

“Instead they chose to hide the body” and concoct a lie, which they apparently told the oldest child in the house he had to go along with.

The boy – with no blood relationship to Valentina – ended up revealing “part of the truth”, says CM. This appears to have been that Valentina was taken into the bathroom of the house the family shared in Atouguia da Baleia by her father and stepmother, after which he “never saw her again”.

But today the paper elaborates – explaining that it was in the bathroom that Valentina will have been fatally injured.

A source told the paper the child was then wrapped in a blanket and laid on the sofa where she stayed the whole day.

The couple apparently told the other children in the house (one aged four, the other a baby) that Valentina had a stomach ache, and that was why she was so quiet.

“The family had lunch and dinner with the child practically inanimate”, says the paper, stressing “Valentina suffered alone and no one helped her”.

It seems the couple even left the house to buy milk after dinner. When they returned, Sandro’s story is that “Valentina was dead”.

At this point, the couple seems to have decided to hide the body some distance away. They are understood to have put all the children to bed and used their car to transport the dead child to the Serra d’el Rei.

This has been a desperate story in difficult times.

CM actually alluded to the financial and social difficulties the family was going through as a reason for the anger that appears to have been directed at the little girl.

Heaping further agony on the situation is the fact that the only reason Valentina was in her father’s home at all was because, due to the pandemic, she had nowhere else to attend ‘tele-escola’. Her mother has no internet.

Had life been ‘normal’, Valentina would have remained with her mother, who understandably is now a broken woman.

If everything CM writes today is correct, it seems Valentina’s mother learnt her daughter’s body had been found through a television news bulletin. None of the authorities involved had called ahead to warn her what was going on air.

The post-mortem examination should leave few doubts as to what killed her and no doubt further details will emerge at some point today or later this week.

Both father and stepmother are expected to be remanded in custody.

Says CM, they have been questioned separately and kept apart since their arrests on Sunday morning (click here).

Alluding once more to the pandemic, CM says council authorities are now concerned the area will see a spike in infections as all those taking part in searches paid very little heed to social distancing.

Today’s crowd outside the court was equally remiss about keeping two-meters apart from each other.