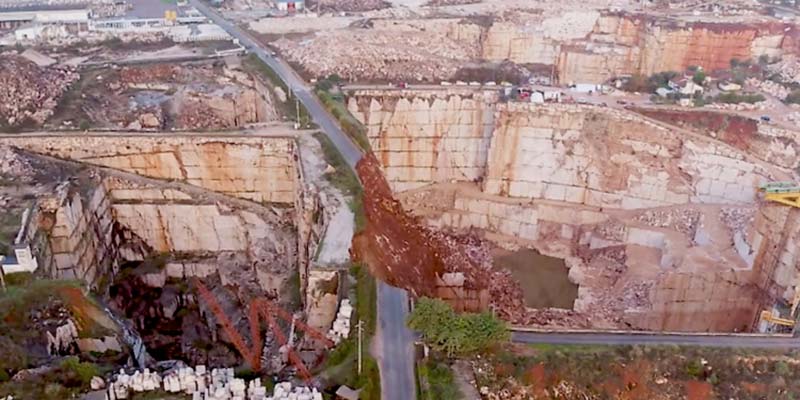 Following on from the tragedy in which five men lost their lives in a quarry landslide in Borba two months ago, a government report has identified 191 other quarries where risks to safety are “critical” to both people and ‘property outside the exploration’ (ie passing traffic).

Expresso broke the story on Saturday, though the report, compiled by the ministry of the environment, has not yet been published.

It purportedly identifies quarries from north to south: the majority of ‘danger sites’ being in the Alentejo (55), though there are three in the Algarve.

Says Expresso, the report will form the basis of a resolution to come from a Council of Ministers “soon”.

The Council of Ministers meets every Thursday, so possibly the resolution will emerge later this week.

It should see quarry owners “start being notified in February” about the works they must implement to “guarantee measures of safety”.

If owners do not comply “central administrative entities will carry out the works coercively” seeking reimbursement afterwards.

How many quarries run the risk of landslides as devastating as the one in Borba is unclear.

Expresso highlights 34 sites where intervention is said to be a “priority” and cites 54 “preventive measures” destined to “avoid the collapse or subsidence of public, municipal and national roads.”

The priority sites alone are expected to see works running to up to €14 million (some of the costs of which will be supported by the government).

Bosses in the sector have been described as “surprised” by the sheer number of danger sites, and the bottom line about their ‘legality’.

As Expresso went on to explain in a subsequent online article about the potential use of drones to check for ‘irregularities’ in quarries, “practically half the Class 1 and 2 quarries (meaning those requiring government licences) are not properly licensed”.

Said Nuno Gonçalves of FEVICCOM, the federation of businesses operating within the quarry sector: “We don’t know the study but we believe it will effectively prove what we have been warning about for a long time, not simply regarding the accident (in Borba). Sadly, the services of the State needed an accident to go ahead with this report…”

In terms of numbers, the 191 quarries identified are just 13% of the national sector: 77 were identified in the north of the country, 32 in the centre, 24 in Lisbon and Vale do Tejo, 55 in the Alentejo and three in the Algarve.

By region, the Alentejo registers the “major prevalence for critical situations (18%), followed by the north (17%).

In all 1,427 government-licensed quarries were investigated as well as smaller operations which only require the basis of local council approval.

Investigators used a ‘grid’ to check for ‘potential collapses’, heap-mass movements (meaning the likelihood of excavated earth and rubble ‘sliding’), ponds susceptible to drowning and the collapse of neighbouring buildings, ‘among other scenarios’.

The Borba ‘tragedy’ – an accident that so many have since said was only to be expected given the precarious conditions – involved a 100-metre section of the EN255 crashing 50 metres into a pit of water below.

Three of the men killed were in a car travelling on the road at the time. Their bodies were not recovered until some time after the accident (click here).

Initially, the government appeared unwilling to accept any kind of blame, but it has since said that it will be ‘indemnifying’ the families of the dead (click here).

Monchique quarry “hasn’t complied with regulations for 15 years”
“Inspection failings” can cover a multitude of sins. The rural population of Palmeira, Monchique, knows only too well how a quarry can operate for years – to the detriment of quality of life for all those living nearby – and still not comply with any of the regulations supposedly in force.

Such has been the case of a ‘hidden-away’ quarry that may now at last be forced to close.

Veteran campaigner Mariette Althaus is still not prepared to ‘cry victory’, as this has been a long, frustrating fight in which homeowners have been taken to the brink, quite literally.

Properties bordering the quarry have ‘huge drops’ to cope with, and fears have always been that “inspection failings” of the site could lead to the contamination of groundwater.

“The quarry is immediately above Caldas de Monchique where Monchique water is bottled and where we have the thermal spa,” explains Stephen Hugman of environmental association A Nossa Terra. “Any contamination, and those businesses could be ruined. I know for a fact that, at one point, there was a great big tank of diesel balanced on top of rocks.

For all I know, it could still be there. If that leaks and gets into the groundwater… well, it would be devastating …”
It is still unclear whether this quarry in Monchique is one of the three highlighted in the damning government report.

Stephen Hugman suggests it may not be – and that, in itself, illustrates the nightmare facing safety inspectors.