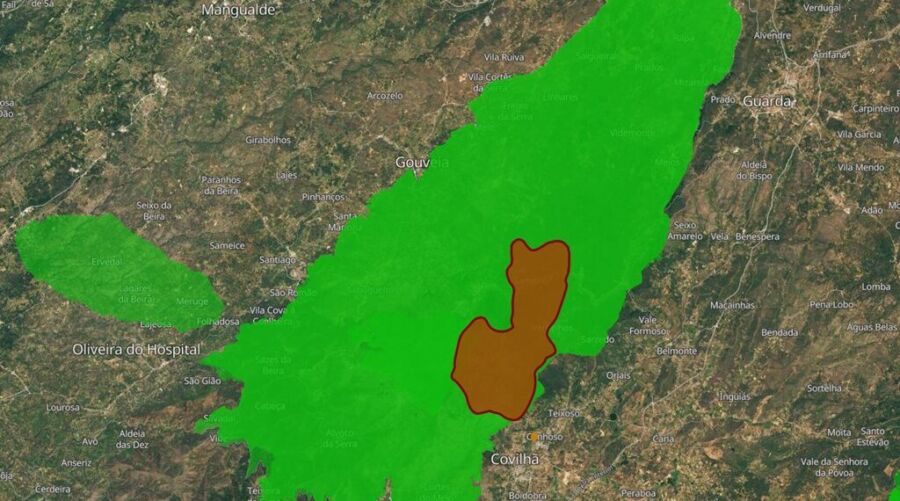 Over 1,500 firefighters battle through night; 13 firefighting helicopters and planes now in air

Thursday morning sees 1,500 firefighters backed by over 470 appliances and 13 planes and helicopters still battling the fire that began in Covilhã in the early hours of Saturday morning.

Reports locally attested last night to 9,532 hectares having been consumed by flames – taking this fire well into the ‘record books’. It remains active even today (having dipped in and out of so-called resolution, meaning the total area consumed by flames will be even larger).

According to EFFIS (image used above) the burnt areas so far are equivalent to the entire borough of Lisbon. In percentage terms, they represent 10% of the Serra da Estrela natural park.

These terrible last few days of firefighting have seen the blaze move first from Covilhã municipality to the municipality of Manteigas. Since then it has advanced into two further municipalities (Guarda and Gouveia), with all press briefings up till now continuing with the message that ‘firefighting is very difficult’. No-one doubts this for a moment, but criticism of the firefighting strategy is now coming from other quarters, beyond the mayor of Manteigas. This morning’s papers refer to the mayor of Gouveia also saying blame for this drama “must not die a spinster” – and that this incident is “full of surreal facts”.

Nonetheless, this blaze more than any others before it this year shows just how uncontrollable blazes have become in Portugal’s new ‘climate reality’. It is very much the same as situations in other countries. This is the new normal for wildfires in the 21st century: they are much more difficult to control than they have been in the past.

This fire remains the ‘most worrying’ in Portuguese mainland territory. Other fires that have broken out since have been contained/ controlled much more quickly. Meantime around 80 municipalities in the north, centre and northern Alentejo remain at ‘maximum danger’ of rural fires.