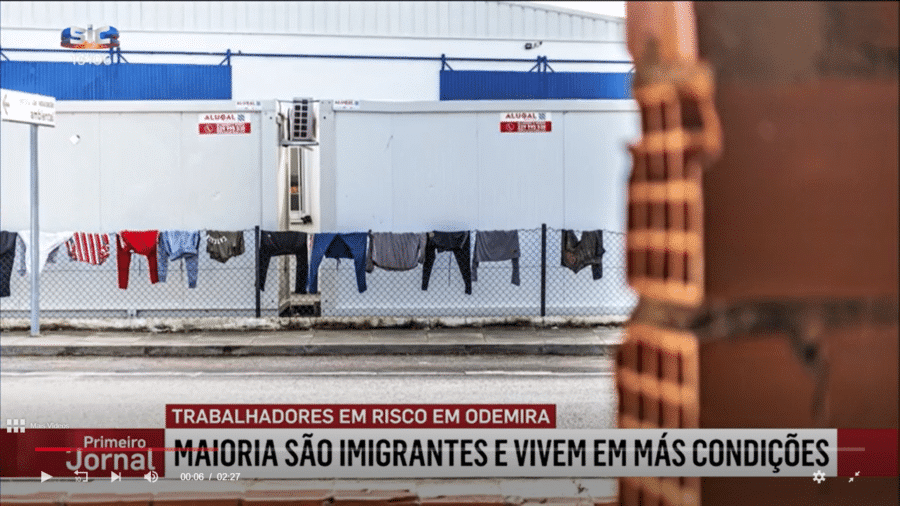 Odemira’s Zmar eco-resort has been requisitioned by the government to ensure immigrant agricultural workers who have tested positive for SARS-CoV-2 have the facilities they require to self-isolate.

It is clearly not a consensual arrangement (see update below this text).

The resort is in the process of insolvency. A dispatch issued by the Ministry of Interior Administration, and published in Diário da República today, explains: “the lack of agreement with the aforementioned commercial entity justifies that for reasons of public and national interest, as a matter of urgency, the need to temporarily requisition the ‘ZMar Eco Experience’ and its respective services, to the extent appropriate and strictly indispensable for the protection of public health in the containment and mitigation of the pandemic in the municipality of Odemira and its surrounding municipalities, by allocating space to carry out mandatory confinement and prophylactic isolation by those for whom this has been determined”.

It is an extraordinarily verbose and rather pompous way of explaining the move in a municipality that now has ‘sanitary cordons’ around the parishes of São Teotónio and Longueira-Almograve.

ZMar sits within the parish of Longueira-Almograve, and with all its space and bijou chalets is indeed a perfect place in which to lodge people who cannot ‘self isolate’ by dint of their living conditions.

This perhaps is one of the clearest examples of how poor the living conditions of immigrant agricultural workers in the Alentejo – particularly within the Costa Vicentina municipality of Odemira – are.

Many newspapers have written of this form of ‘modern day slavery’. Closer to home the campaigning group Juntos Pelo Sudoeste has done its best to power action (click here and here) on several levels. Covid-19 seems to have tipped the balance.

Odemira’s alarmingly high incidence of cases (560 per 100,000) is almost entirely if not totally due to the immigrant population which does not appear (yet) on any census. On paper, the borough’s population is 26,000. Thanks to the proliferation of plastic-covered greenhouse  tunnels throughout hectares of the borough, there are thought to be at least 14,000 extra in the form of immigrant labour, most of it from the Asian subcontinent.

According to Expresso, AHSA – the association of horticultural producers in the boroughs of Odemira and Aljezur – insists there are no positive cases in any of the workers living in containers on agricultural explorations. The association even goes as far as to insist the containers “have quality, comply with requirements and are controlled”.

Yet anyone driving through Odemira will see properties by the roadside in which the overcrowding of immigrant workers is all too plain.

For the time being ZMar will be used by authorities “while the borough of Odemira (for that read the whole country) remains in a situation of calamity”.

The running of the complex will be the responsibility of the municipality – supported by DGS health authority and Social Security.

Says the government dispatch, the owners of the bankrupt resort “will be compensated for any losses resulting from the requisition, to be calculated under the terms of the Expropriation Code, with the necessary adaptations the responsibility of the Ministry of Finance”.

According to Dinheiro Vivo, the resort was “in the process restarting operations in the current phase of deconfinement”. Only this week the 400-or-so creditors owed upwards of €40 million had “approved the presentation of a plan for insolvency and maintenance of activity of the company”.

The requisition order will have sent all these plans spinning into the long grass.

Meantime Diário de Notícias has carried swingeing criticism of the government by Dário Guerreiro, the president of São Teotónio parish council, who claims the executive has ‘known about the problems’ involving immigrants and overcrowding in the borough of Odemira for “a very long time” – and done absolutely nothing about it.

Thanks to the imposition of sanitary cordons in São Teotónio and Almograve-Longueira life in the borough has taken a new dive, with citizens “prohibited from circulating, or even being in the streets for non-essential purposes.

Mr Guerreiro addressed questions to the ministers of habitation and of agriculture, in a bid to ensure the problems his municipality is having with immigrants, particularly when it comes to their housing, “never happens again”.

For example, he said, once the pandemic situation of the borough is more controlled, what is the plan? “ Where are authorities thinking of putting these people? Back in their houses? It’s that we have houses here with 40, 50, 60 people in them? Is it just going to continue the same?”

Since this text went online, Lusa has reported that around 20 owners of properties in ZMar have held a protest on the site today and flatly refuse to leave their properties. They claim the government has ‘no idea’ of what ZMar entails: it is not simply a resort, there are privae homes on it. Said lawyer Nuno Silva Vieira who represents around 114 of the 160 owners: “There are 260 houses, 160 of them private – yet this civil requisition is for the whole resort. For this reason, I sincerely hope the government is going to change this decision.

“No one is going to leave their houses. We will wait calmly here waiting for the government to come and talk to us, because for sure they do not know this development…”

Mr Silva Vieira “reinforced that the resort is not a campsite, and that according to the most elementary constitutional rule of the right to habitation, no one can leave their homes without an order from a court.

“The government is not a court and the people who live here are not abandoning their homes to make way for people who are ill. This has nothing to do with lack of good will, it has to do with laws”.