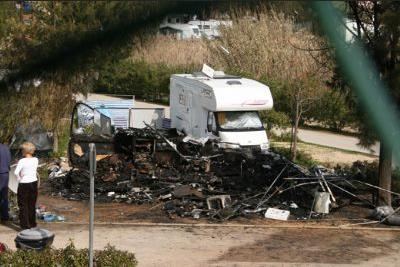 A Dutch couple have died following a fire in their caravan on Wednesday.

The incident, which happened at the Orbitur campsite next to the Hotel Zodiaco in Quarteira, was brought to the attention of site manager José Luís Chaves by other campers at around 6.30am.

José Luís Chaves said: “Other campers attempted to put out the fire but by the time we reached the area the temperatures were too high and it was impossible to fight the flames.”

The couple, who were described by the campsite manager as being in their seventies, had been visiting the Algarve for winter holidays for the past six years and would stay at the campsite for up to four months at a time. “The couple were well liked at the campsite and we are all very sorry about their deaths,” said José Luís Chaves.

No-one else at the site was injured by the fire and there was only minimal damage to other property, despite the caravan of the couple being completely destroyed by the fire.

A GNR spokesman told the Algarve Resident: “We believe the explosion was caused by a gas bottle in the caravan.”

However, José Luís Chaves said: “The gas bottles from the caravan were intact and we believe that the sound of an explosion came from the tyres bursting during the fire”

At the time the Algarve Resident went to press the GNR confirmed that the PJ were investigating the incident.