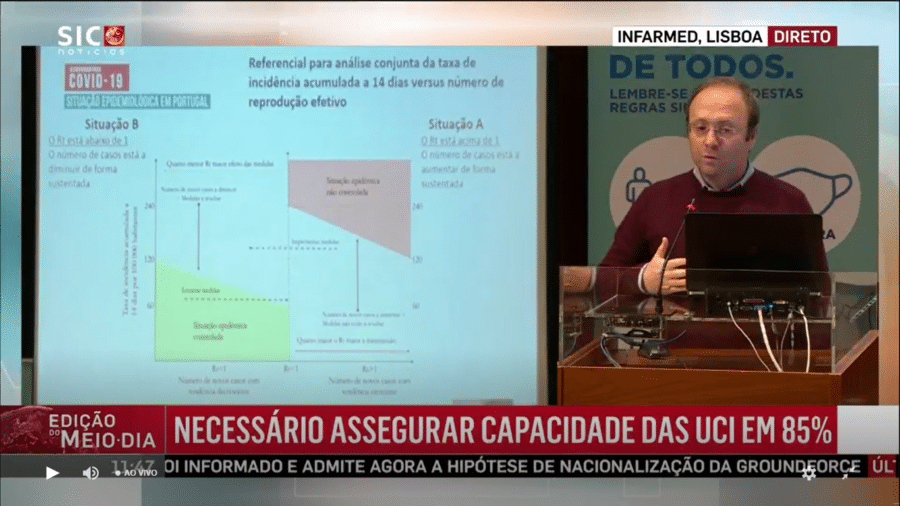 As we write this text the President of the Republic, government ministers and party leaders are ‘meeting’ with experts at Infarmed to hear Portugal’s epidemiological situation ahead of Thursday’s announcement on deconfinement.

The news so far has been good: the country’s Rt (transmission) rate remains the lowest in Europe (albeit the downward tendency is ‘decelerating’); the over-80s are now no longer the largest age group in intensive care, and this has been attributed to the fact this age-group is being protected in the current ‘first phase’ of the vaccination roll-out.

The predominant age of people in intensive care these days are patients in their 60s.

Today’s meeting will lay the basis for decisions to be taken by the President and indeed the government later this week.

Among ‘interventions’, says SIC television news, specialists will present proposals for the future. “Strategies that will help the government delineate the plan for deconfinement which should be announced on Thursday”.

Talking ahead of the meeting on his habitual television slot last night, commentator Marques Mendes said deconfinement will start on March 15 with creches, pre-school and primary schools.

He said it was “still in doubt” whether small commerce would be allowed to reopen (click here). But he was categoric that ‘circulation between boroughs’ will be prohibited over the Easter weekend (April 2, 3 and 4).

So far the meeting has heard that experts are now expecting numbers in ICU to fall to as little as 120 by the end of this month – and thus the moment is fast-approaching when deconfinement can happen with a degree of ‘safety’ and security for the SNS health service.

The bottom line message nonetheless is ‘caution’. The variants (particularly the British variant which now accounts for 65% of cases in Portugal) are still active.

Warn epidemiologists, borders will have to be manned with ‘increased vigilance’ to ensure infected people do not pass through.

The meeting is due to end at lunchtime today.