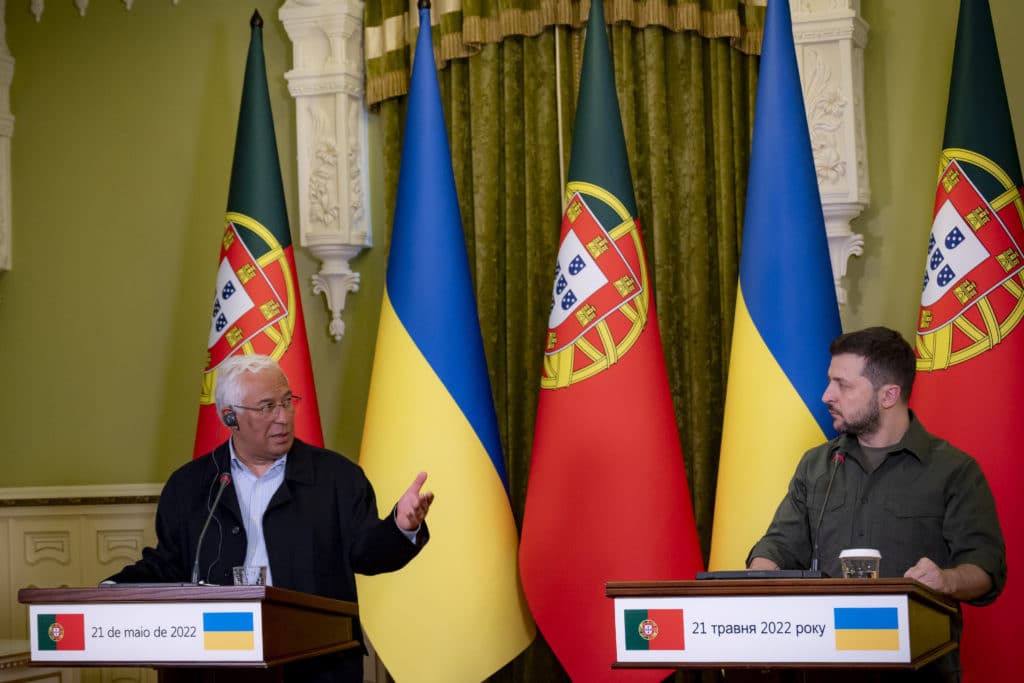 Portugal’s prime minister António Costa has been in Ukraine today, offering further assistance from Portugal as the country struggles to free itself from the Russian invasion.

His arrival by train early this morning saw the PM launch into a whistle-stop schedule, some of it showing first hand the dismal results of heavy aerial bombardment.

In Irpin where 70% of the city has been destroyed and hundreds killed, the images on the PM’s Twitter account said it all.

In the seven years António Costa has led Portugal’s Socialist government there haven’t been photographs in which he looked so deeply disturbed. 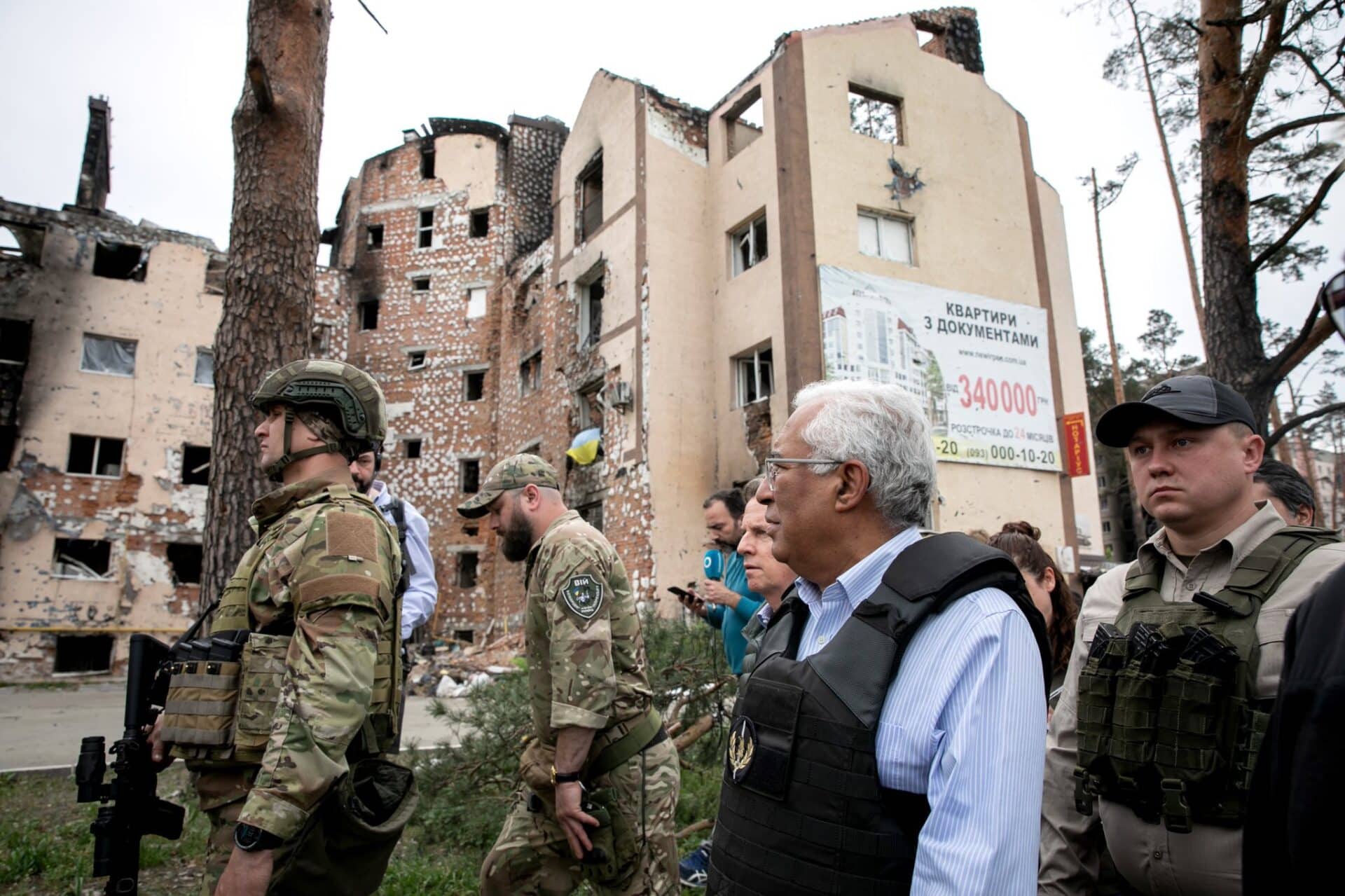 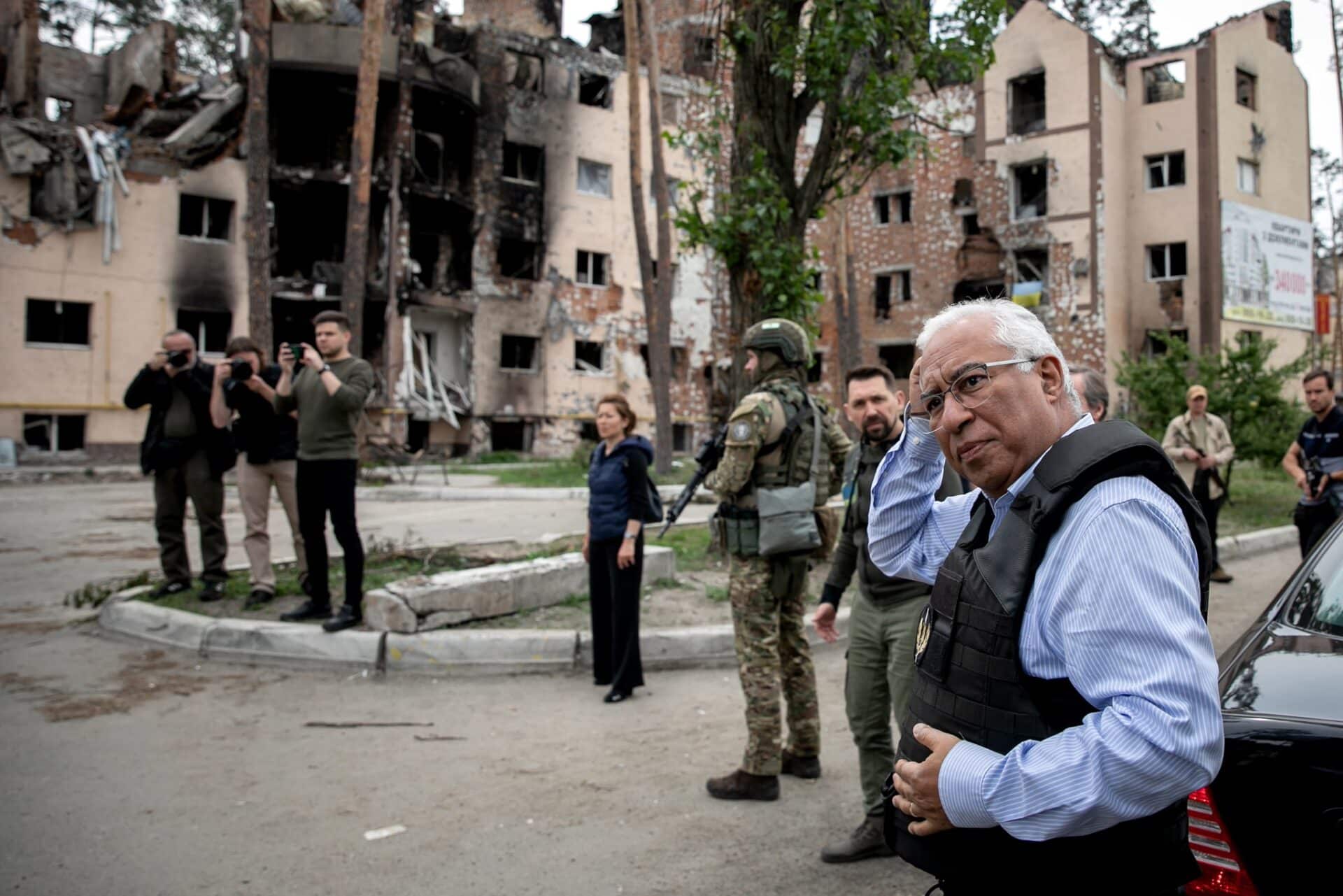 “I witnessed here evidence of cruel, indifferent and in every way unjustified attacks”, he wrote of Irpin. The visit “will always stay in my memory. The level of destruction and violence is absolutely devastating”.

“We all know that war is almost dramatic”, he told the press pack surrounding him. “But war has rules. Here we are not talking of a normal war, but real criminal acts”.

Mr Costa’s words came as the slaughter of civilians in Bucha by Russian soldiers has been further corroborated by CCTV footage obtained by the New York Times.

From the horrors of Irpin, Mr Costa was transported back to Kyiv where he met with President Zelenskyy – a man he described in the press conference that followed as “a leader who inspires the world and who has given everyone a great example of courage, personalising the remarkable resistance against illegal and the barbaric way in which Russia has conducted the war on Ukraine territory”.

And it was here that the start of the pledges of help and support from Portugal came:

Aside from financial help, Portugal will be supporting Ukraine’s bid for full EU membership with ‘all the technical support possible”, said Mr Costa, adding: “We welcome with open arms the very clear choice that Ukraine has made, for Europe”.

Volodymyr Zelenskyy affirmed that “Portugal has been helping since the first days of the war. We are very grateful (…) Portugal in this fight is on the right side of history”.

Indeed, as so many have said of these last horrific months, this is one of the most black and white struggles of recent times. Not to support Ukraine, is not to support freedom.

Mr Zelenskyy added that his country will accept nothing less than full EU membership.

“Adhesion to the European Union will be a very important sign for our people”, he said. “The alternative path ends up constituting not a compromise, but a pledge with the Russians, a surrender to the pressures” of Vladimir Putin’s regime.

Regarding Portugal’s offer of financial help, the PM “showed willingness for Portugal to participate in a programme of school and kindergarten reconstruction, or in sponsoring the reconstruction of a territorial area indicated by Ukrainian authorities”, explain reports.

“We told the Ukrainian government we are available to sponsor a geographical area”, Mr Costa explained. “But we proposed that President Zelenskyy considered another solution: sponsoring the reconstruction of schools and kindergartens, because it is fundamental to invest in the future and guarantee that new generations of Ukrainians have a future in their own country”.

At this point, Mr Costa went on to ‘step three’ of the day – the meeting with Ukraine’s prime minister Denys Shmyhal, to sign a new agreement for €250 million in financial support. 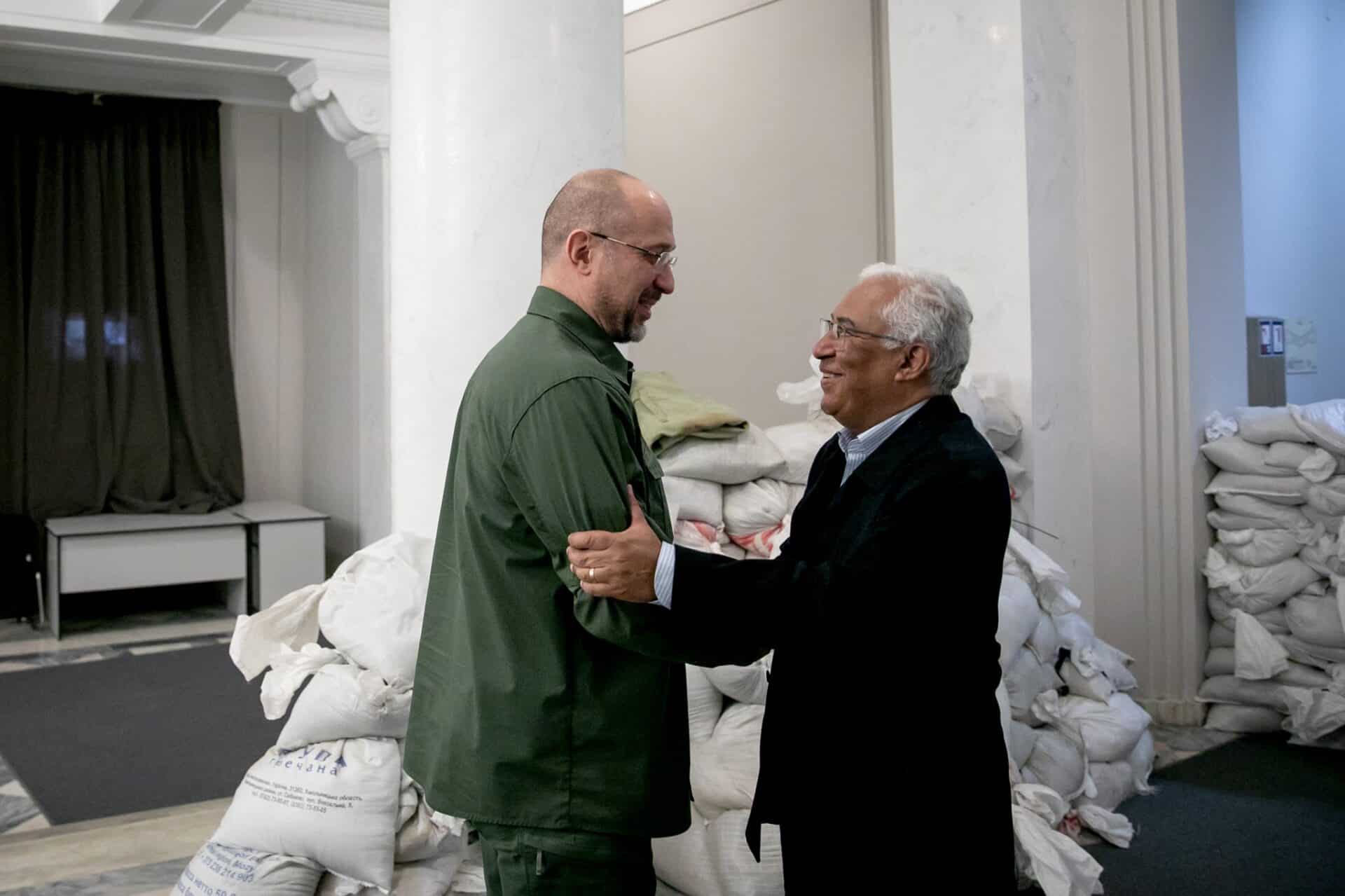 The money will see €100 million transferred through the course of this year “through an account for Ukraine in the IMF or through other channels that the EU will open for direct financing”. The remaining €150 million will be transferred to the Ukrainian State over the next three years.

As Portugal’s PM pledged this new envelope of funding, US President Joe Biden announced another €40 BILLION in “assistance to face the Russian invasion” – underlining the reality that all talk of ‘reconstruction’ has to be weighed against the fact that Ukraine is still struggling to remain sovereign.

Step four of Mr Costa’s whirlwind schedule saw him formally ‘decorate’ embassy staff member Andrei Putilovskiy with the Order of Liberty, for keeping the Portuguese embassy running throughout the period of conflict and while the ambassador has been ‘relocated’ to Poland.

He stressed the ambassador will now be returning to Kyiv.

And then it was time to turn back, and head west to start the journey home to Portugal.

Mr Costa is bringing with him an invitation to President Marcelo to visit Ukraine “at an opportune date”.

Marcelo, on his own way back from a State visit to Timor, has said he will take up the invitation as soon as the government thinks it is “the right time, and in the interests of Portugal”.