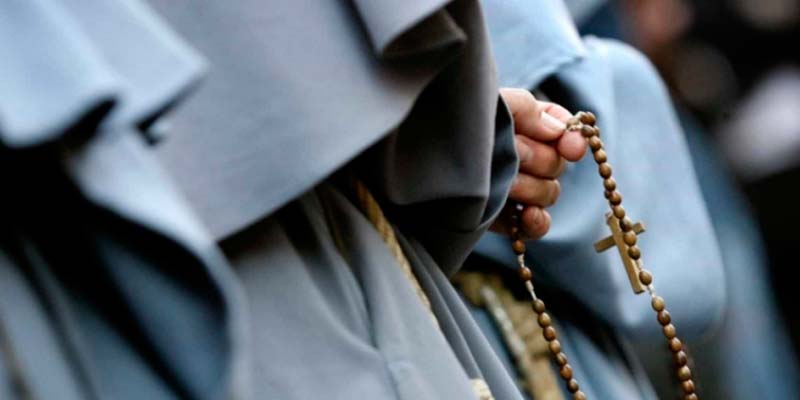 Priest and two colleagues receive jail terms of 15,14 and 12 years

Justice has finally acted on the ‘convent of horrors’ that persecuted young women for more than 20 years in Requião, Vila Nova de Famalicão.

This story is all the more shocking for the fact that the local archdiocese was informed of the evil at work at the ‘Fraternidade Missionária de Cristo Jovem’ but apparently did nothing.

“The archdiocese is more than compromised. Some of the novices were consecrated in ceremonies in which the Archbishop Emeritus of Braga, D. Eurico Dias Nogueira was present”; they took the opportunity to tell him of the “inadequate practices” at work. But nothing concrete changed.

Even worse, this is a case that was ‘exposed’ in 2015 – at which time all those receiving condemnations yesterday were officially made ‘arguidos’ (suspects). Yet it has taken seven years to get to the point where they are ‘condemned’.

This moment is all the more poignant for the family of a 55-year-old nun found dead at the bottom of a water tank in 2004.

The family of ‘Maria Amélia’ were always certain her death “was provoked by the violence and humiliation to which she was subjected”.

Yesterday, they heard the court award them €335,000 compensation (it is not clear who or what will be paying these damages. The family’s lawyer had been hoping to get convictions for the Diocese of Braga, and the Archbishop Emeritus himself, but both were absolved).

It is also not clear when the guilty priest, now aged 90, or the ‘nuns’ (apparently masquerading as nuns, but not officially ordained) will be taken into preventive custody.

Their lawyer Gonçalo Nabais has intimated he will be lodging appeals. He told reporters outside the court yesterday that he hadn’t yet managed to talk to them but “I told them to remain calm, that we will sort everything out”.

What he intends to sort out is a mystery. The court has accepted as proven that the four used nine novices as slaves, and treated them abominably in “a climate of terror and fear”.

“The court understood as proved that the four defendants elaborated a plan, an ambush, which managed to reel in God-fearing young women from humble backgrounds, convinced of their religious vocations, forcing them to perform daily tasks without any kind of financial compensation”. These young women were insulted, beaten, made to work 20 hours a day, in short “subjected to barbarous agressions” and “total dehumanising exploitation”. All this from people who set themselves up to be “God’s representatives on earth”.

“The condemnations reflect the gravity of these crimes”, said lead judge Paula Sá. “It was a form of moral homicide (…) One of the victims killed herself, others thought of suicide. There were ruined adolescences and difficulty (for those who escaped) in restarting lives. It is evil what was done under the cover and protection of the Catholic Church…”

Reports in the newspapers have not alluded to the depths of some of that evil. Back in 2019 when the case began, the court heard of how one novice running a fever had been served a lunch of dog’s excrement. It also heard how novices had been forced to perform gardening duties stark naked.

Judge Sá’s words of condemnation arrived in the same week that national media described how “hundreds of Catholic Priests” in Portugal have sexually abused children since the 1950s. A commission set up to bring closure to victims has already heard from over 330 people abused as children, but only a tiny fraction of the cases have been forwarded to the Public Ministry – and even then there is little faith that guilty prosecutions will follow.