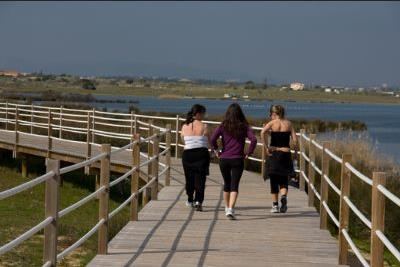 Following criticism from a regional environmental association, the opening of the Salt Beach Club, due to take place tomorrow (Saturday) in the area surrounding the Lagoa dos Salgados lagoon near Armação de Pêra, has been cancelled.

A spokesman from the regional non-profit environmental organisation Almargem said last week that the landscaping work carried out so far has caused disruptions to the wildlife in the area because of land movements and the removal of vegetation (see the Algarve Resident edition, July 10).

Following his criticism, Silves council denied that the project had been approved and stated that the licensing process had not been completed to allow the evening entertainment venue to open.

Silves Câmara President Isabel Soares told the Algarve Resident that the council only received a special licensing request for noise, which can be used for launching fireworks or for an event that will exceed the legal time limit but could never be used for a commercial drinks and dance space.

She added that a licensing request was also made for a 30-day period but the extra documents, including the authorisation from the land owner where the temporary Salt Beach Club was to be built, were not handed in.

She added that for reasons unknown to her agency, the project’s organisers Ritmos e Fragmentos did not have all of the necessary conditions for the licences to be granted.

“I regret that the creativity and energy put into this initiative has all been made impossible,” she added.

Meanwhile, hundreds of dead fish have appeared washed up along the shore of the Lagoa dos Salgados lagoon, which has caused upset among visitors to the beaches that have also suffered from an increase in mosquitoes.

This problem has been caused by a discharge of sewerage into the Espiche stream, which flows into the lagoon and with the rise in temperature has caused a lack of oxygen in the water.

“The water in the lagoon is not replenished by the sea, and in the summer it receives a lot of treated water from the Pêra sewage treatment plant, which is still rich in nutrients.

“This causes algae to grow which at night consume the oxygen and cause fish to die,” said Paulo Cruz, a spokesman from region’s water resources authority (ARH).

He added that the opening of a new inter-municipal water treatment plant later this year in the west of Albufeira will allow the Pêra and Guia plants to be closed down, meaning that this situation will be resolved.