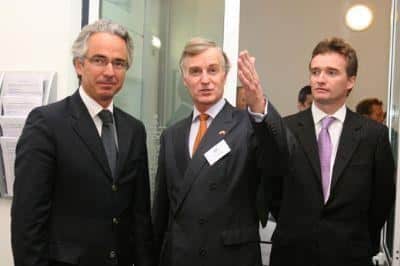 The British Vice-Consul to Lisbon, Gillian Herculano, explained that in order to be modern and provide a modern service, it was necessary that the service be presented in a modern way and in modern surroundings.

She added that the newly revamped offices now accept credit cards, will shortly accept Multibanco with a newly installed machine system as well as an up-to-the-minute cash register and computer that compiles statistics.

The new offices now include office space for the three consular staff on the same level as the customer reception and a ‘Tea & Sympathy Room’ to deal with those delicate matters such as bereavement.

Despite the near parity between the Pound and Euro, which risks making Portugal less attractive as a destination, Bernardo Trindade, the Portuguese Secretary of State for Tourism, said at the inauguration: “We are working closely with our UK partners to maintain their confidence in Portugal and my presence here reflects exactly this kind of solidarity and closeness we have enjoyed for so long.”