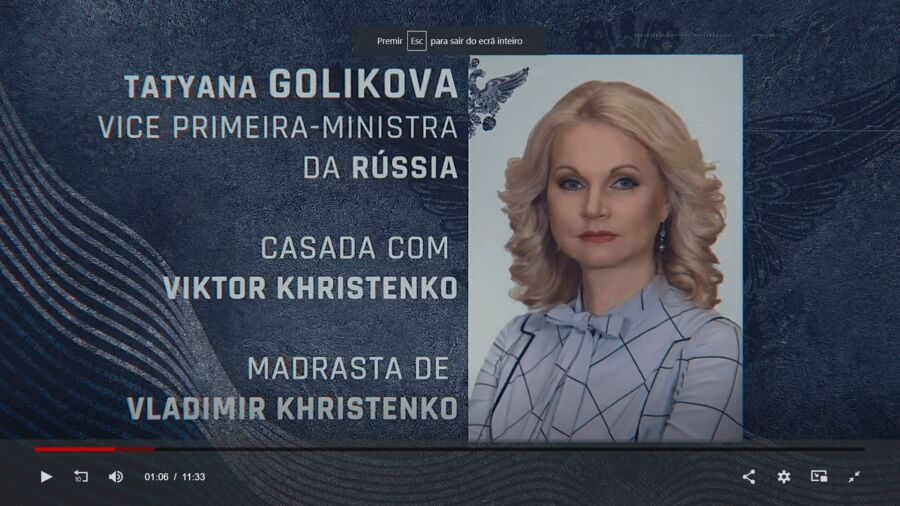 An investigation by Russians supporting jailed dissident leader Alexei Navalny has exposed what appears to be a web of investments made in Portugal by Russian politicians close to Vladimir Putin.

The nucleus of the web is reported to be Russia’s vice prime minister Tatyana Golikova.

CNN Portugal has broadcast the findings, stressing the Navalny team has asked the Portuguese government to sanction the assets of Golikova and her family.

João Paulo Batalha of Portugal’s Transparency and Integrity (an arm of the wider Transparency International) accuses the government of up until now showing ‘inertia’.

It has had “an attitude of enormous complacency which I cannot tell if it is fruit of complicity or mere incompetence”, he told the station.

“But as a result Portugal has become a safe haven for the money laundering of oligarchs of all kinds, including Russian oligarchs and people who are politically and even militarily involved in the war in Ukraine”.

These Russian connections to Vladimir Putin on Portuguese soil have previously been alluded to by Russia expert José Milhazes, who shares a regular slot on the Ukraine war on SIC television.

It has to be remembered that previous ‘investigations’/ information from Alexei Navalny himself have stirred up veritable hornets nests in this country.

It was Navalny who tweeted just before Christmas last year about “Portuguese officials carrying suitcases of money” after Roman Abramovich discovered a country where “you can give bribes and make some semi-official and official payments to end up in the EU and NATO”.

The series of tweets set off a major investigation that has all but torpedoed the Sephardic Jew Nationality Law.

This latest information is that Tatyana Golikova, a leading political figure with responsibilities for Social, Labour and Health policies in Russia, purchased a mansion in Spain, registered in the name of a Portuguese company.

As the Navalny Anti-Corruption Foundation team told CNN: “This investigation began by taking us to Spain where we discovered the luxury villa belonging to Tatyana Golikova. The owner of this villa is a Portuguese company, and this is what took us to Portugal where we found several other assets.”

The Portuguese company ended up being ‘another mansion’ – and this led on to “some businesses” and another two ‘sumptuous mansions’.

The team has various names in their sights, beyond Russia’s vice prime minister. They include her husband Viktor Khristenhko, a former ‘right hand of Putin’ as Russia’s minister of industry, and his son from a previous relationship Vladimir.

Vladimir Khristenko is associated with family businesses that have been in Portugal “since at least 2012”, says the Navalny team.

Pressure now is on the governments of Spain, Portugal and France (where other assets have been identified) to impose sanctions.

Says the team’s Georgy Alburov, the discoveries “have been a surprise for us. Normally, corrupt Russian officials register their properties in the name of family members and offshore companies. In this case, the properties of a Russian official in a European country have been registered to a company in another European country. It’s quite unusual”.

CNN’s report stresses that for João Paulo Batalha there can be no doubt. The money that bought these mansions/ businesses is “dirty (…)” if not “soaking in blood” (a criticism coming from the Navalny team).

“This kind of business has all the hallmarks of a business of money laundering”, he tells the station”, says Batalha.

Thus the questions are, will the Portuguese government act on the Navalny team report? They tried very hard not to act on Navalny’s warnings before Christmas.

CNN reports that yesterday “the Public Ministry and PJ carried out searches at the Lisbon home of Yulia Aleksandrovna Sereda, former vice president of the Russian bank Gazprombank. They also blocked a transfer of 800,000 euros and broke into a personal safe at (Ms Sereda’s) bank”.

Yulia Sereda reportedly entered the country on a golden visa and is suspected of the crime of money laundering, says the station, quoting Sábado.

Nonetheless, up till CNN’s report went on air, the ministry of foreign affairs had not confirmed whether it was applying any new sanctions on Russian held assets on Portuguese territory.

Says CNN, beyond the European list of sanctions, individual countries can suggest other names to be sanctioned and can also take the initiative to scrutinise and apply measures to Russian citizens with property on national territory considered to have an active role in the Russian regime. “It is a political decision”, agrees João Batalha.

Maria Pevchikh is one of the investigators behind this latest exposé. She told CNN: “While Vladimir Putin is in power, the whole world is in danger. It is wrong to think that living in Portugal we are far from this danger. We cannot begin to predict the way Putin’s uncontrollable, chaotic behaviour will influence our lives. This is a battle we have in common”.