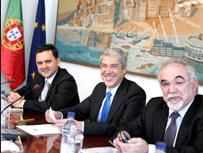 THE GOVERNMENT is to force companies to pay five per cent towards social security contributions on freelance work registered on Green Receipts.

The measure announced by Social Security Minister, Vieira da Silva, forms part of sweeping changes to the Portuguese Employment Code, Código do Trabalho, which comes into force in 2009.

Those freelance workers on Green Receipts will pay a one-off social security payment calculated at 24.6 per cent of their incomes, which will cover health and unemployment cover. The government says that it wants to reduce social security responsibilities for those companies that offer full time contracts to its employees.

“These are strong, powerful and effective measures to fight insecure employment,” said Prime Minister José Sócrates after having presented the new measures to unions and other social partners.

According to the Minister of Employment and Social Security, Vieira da Silva, the government hopes to stimulate intense debate on the Employment Code, particularly in parliament, so that the new proposed alterations can become law in 2009.

Fixed term contracts could soon have a maximum limit of three years against the six years practised now.

Maternity and/or paternity leave is also to be extended to include the first year of an infant’s life.

“The whole point of these proposals is to encourage company adaptability,” said the minister, who added that the working day could be increased by two hours so long as the weekly total does not exceed 50 hours.

However, such changes can only be allowed in companies where two-thirds of the workforce agrees to the two hourly daily upper limit.

“Independent workers (freelancers) that are working under the so-called false Green Receipts regime, i.e. have regular weekly or monthly work without contract, are penalised by the simple fact that their social protection falls completely on their shoulders and the companies they work for make no social discounts at all,” said the minister.

The government wants these companies to pay five per cent on the income from each Green Receipt passed which is equal to the reduction being offered to employers employing staff on full time contracts.