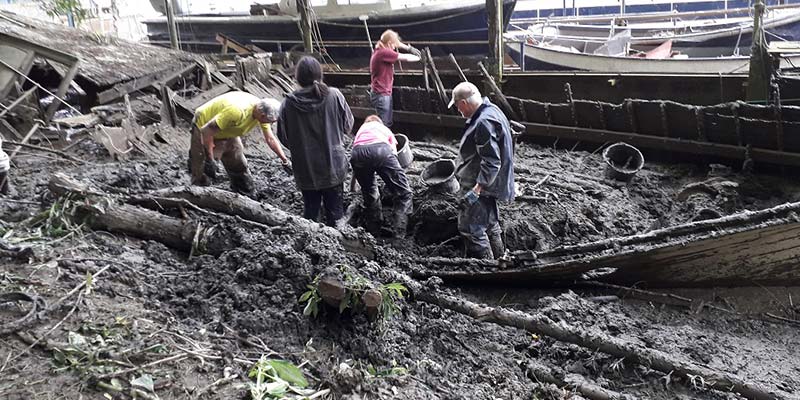 The Algarve Archaeological Association (AAA) will be presenting two lectures, in English, by Will Rathouse on Tuesday, November 5. Under the title ‘River Thames Revisited: recent discoveries, community archaeology and mental wellbeing’, the first lecture will be at 2.30pm at the Museu do Traje in São Brás, the second will be at 6pm at the Convento de São José in Lagoa.

Will Rathouse will be returning to talk to the AAA about the latest finds from the award-winning Thames Discovery Programme (TDP) and will introduce their sister project CITiZAN (Coastal and Inter-Tidal Zone Archaeology Network) which monitors and records erosion-threatened archaeology on the British coast.

The TDP facilitates communities in London to monitor and record the appearing and disappearing archaeology of the Thames Foreshore (or tidal zone). Their work over the summer has taken them to a number of sites along the Thames including Isleworth, West London, where the poorly preserved remains of Royal Navy motor launch ML-286 were recorded, including the creation of a 3-D model. She is the last survivor of over 580 launches used to watch for and hunt German U-Boats during the First World War.

Sold off after the war she became a houseboat named ‘Cordon Rouge’. In 1940, she was requisitioned (and renamed ‘Eothen’) to join the flotilla of ‘Little Ships’ rescuing British troops from Dunkirk in Operation Dynamo. The TDP also undertook projects at Rotherhithe, Putney, Fulham and Greenwich recording an array of archaeological features along the foreshore.

On the community side of the TDP, Will Rathouse will reveal plans for the next phase of funding for the project. This aims to support mental health and wellbeing through outreach work to people in need, such as forces veterans and people experiencing mental health problems, dementia and Parkinson’s. He will explain why this kind of work is revolutionising archaeology in the UK and beyond.

William Rathouse is a community engagement archaeologist for MOLA (Museum of London Archaeology) working on the Thames Discovery Programme and other community projects. His responsibilities include outreach to over 75s and bringing in new groups to benefit from the project, including people with mental health problems and forces veterans. Previously, Will was a support officer for Mind Aberystwyth and led archaeology projects to promote mental health.